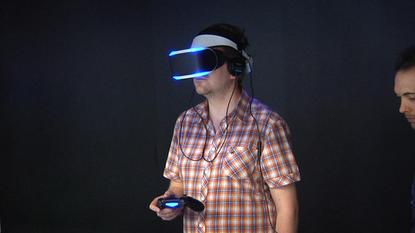 A visitor to the Game Developers Conference in San Francisco tries out a Sony Project Morpheus headset on March 19, 2014.

It's a head-mounted gadget that works as a virtual reality system for the PlayStation 4.

We'll take you to the Game Developers Conference in San Francisco, where it was unveiled on Tuesday evening.

The prototype has a 5-inch LCD display with a field of view of 90 degrees and a resolution of 1080p. It has an accelerometer, gyroscope, HDMI and USB connectors, and 3D sound that changes what the player hears depending which way they're facing.

The next day, attendees got a chance to try it out and we asked them what they thought of the experience.

We also take a look at another virtual reality headset from startup Oculus. The company launched the second development kit for the Oculus Rift at the show, and we talked to some of the people who tried out the US$350 device.

Oculus founder Palmer Luckey talked to us about the headset and told us why he thinks virtual reality is not just the next big thing, but the last big thing in gaming.

Is he right? Watch our show and decide for yourself!

Other stories we're covering this week include:

-- Google kicked off an effort to bring Android to wearable devices, reminding everyone that the OS is not just for tablets and smartphones.

-- Apple replaced the iPad 2 with the fourth-generation Retina iPad as its lowest-priced tablet, a likely reaction to both pressure from cheap Android tablets and the advanced age of the iPad 2.

-- Satya Nadella will hold his first press conference as Microsoft's CEO next week, and reports are emerging that he'll unveil a version of the Office suite for Apple's iPad. Nadella will appear at a press briefing in San Francisco next Thursday.