Mobile games could look better with ray-tracing tech from Imagination 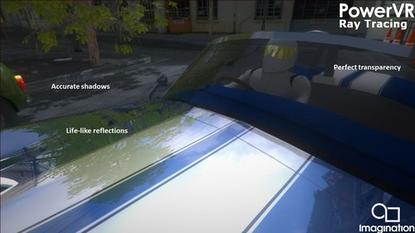 More vivid games with better shadows, lights and reflection could come to iPhones in the near future as new mobile graphics technology announced by Imagination Technologies hits the market.

The new technology is ray tracing, which involves generating "photo-realistic" images by accurately tracing paths of light, said James McCombe, director of research for PowerVR ray tracing at Imagination Technologies. The chip designer -- whose graphics cores go into the iPhone -- on Tuesday introduced the PowerVR GR6500 mobile graphics processor with the technology.

With ray tracing, gamers could use reflections on a surface as a mirror to see if anyone is approaching from the rear, which could be useful in a shooter game. The technology also enriches visual details like shadows and reflections, which could enhance 3D effects. Such features were traditionally reserved for PCs and consoles, but Imagination has managed to fit ray tracing into lower-power chips for mobile devices.

Ray tracing has been researched for decades, and companies have had trouble implementing the technology in GPUs. With deeper pixels and more visual effects in games today, a lot of computing power is needed to process moving objects, changing scenes and lighting. Ray tracing involves calculations to accurately sample the track a ray of light follows, but Imagination's ray tracing engine is designed to meet those computation challenges and make such processing more power efficient.

"By allowing mobile games to use ray tracing for these effects, the result is a better-looking game that is easier to develop and a GPU that uses less bandwidth and consumes less power while playing that game," Peterson said.

Developers will also be able to write leaner games in much faster time, McCombe said, adding that creating lighting effects and other visuals becomes easier.

"They can stop doing a whole bunch of precalculation work ... as it can be done in real time," McCombe said.

Imagination's ray tracing technology has been integrated into the popular Unity 5 game development engine, which was also announced at the Game Developers Conference. Unity is the most popular development suite for mobile-game creation.

Like ARM, Imagination Technologies licenses graphics cores that chip makers ultimately use in products for mobile devices and PCs. Apple and Intel are among the notable licensees of Imagination's graphics cores.

When a developer says he wants a game to fire a ray in a certain direction, "our hardware will figure that out," McCombe said. "At the low level we do what we're told to do."

The GPU has 128 cores in four shader clusters, and delivers up to 300 gigaflops of performance with clock speeds up to 600MHz. The core can deliver ray-tracing performance of 300 million rays per second and 100 million dynamic triangles per second. The graphics core is being demonstrated at the Game Developers Conference being held in San Francisco this week.