Microsoft to ship Surface tablet with LTE for $679

Microsoft's Surface 2 with LTE features has a SIM slot and is unlocked, but will work only on specific cellular bands 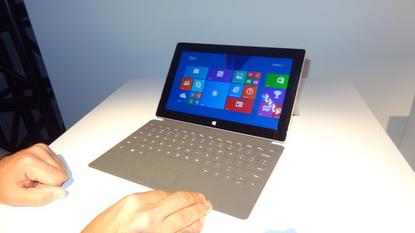 Microsoft is bringing LTE mobile broadband to its Surface 2 tablet with a new model that will start shipping on Tuesday for US$679.

The 10.6-inch tablet runs Windows 8.1 RT, has 64GB of storage and uses an Nvidia Tegra 4 processor. The model is unlocked, meaning any SIM card can be slotted into the device, but the mobile broadband feature will only work only on certain 3G and 4G bands.

Microsoft did not introduce LTE in its faster Surface Pro 2 tablet, which has Windows 8.1 and an Intel Core i5 processor The company declined to comment on whether mobile broadband would be added to that tablet.

The LTE feature makes the Surface 2 more mobile and was introduced for those who need to be online when Wi-Fi isn't available, said Panos Panay, corporate vice president of Microsoft Surface, in a statement.

The tablet is compatible with AT&T's LTE network in the U.S. AT&T did not announce pricing on data plans for the new Surface 2. For international users, SIM cards will only work on the 4, 7 and 17 4G LTE bands and 1, 2 and 5 3G network bands. Users are advised to check if their SIM cards are compatible with those bands before using it with the Surface 2.

Beyond the addition of the SIM slot, there are no substantial changes in the tablet hardware, weight or battery life. The new Surface 2 will offer 10 hours of battery life, which is line with estimates on other models. LTE can be power hungry, but Microsoft spokesman said that the non-LTE models offer battery life of up to 14 hours, so the estimate on the LTE model is conservative.

The tablet has a 5-megapixel rear camera, 3.5-megapixel front camera, 2GB of RAM, USB 3.0 port and MicroSDXC slot for expandable storage. The screen can display images at a 1920 x 1080-pixel resolution.

Microsoft has bundled Office 2013 RT in the tablet, which includes Word, Excel, PowerPoint, OneNote and Outlook. Microsoft is also offering free Skype phone calls to 60 countries for one year.

The new LTE tablet is available in the U.S. through Microsoft's retail website, Best Buy and other retailers. The company did not talk about international availability.