Secusmart puts its BlackBerry encryption chip to work on the desktop

Secusmart is also behind a new voice encryption app that could help multinational, multiplatform enterprises 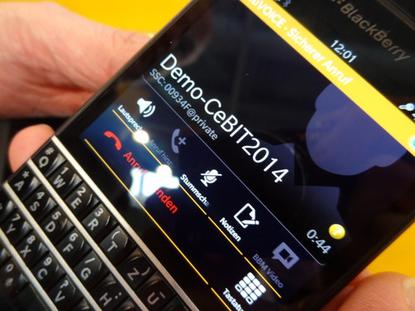 At around €2,000 (US$2800) each, the secure smartphones that SecuSmart showed at Cebit last year were out of reach of many businesses -- although three governments have since bought them to secure mobile phone calls between senior officials, according to CEO Hans-Christoph Quelle. Now the company has developed a less expensive and more flexible system intended for the enterprise, and has extended the reach of its mobile system to secure VOIP calls on desktop phones.

The SecuSuite smartphone security system is built on the Balance feature of BlackBerry OS 10, which separates business and personal apps and data into two partitions. SecuSmart uses special SD cards containing a cryptographic engine and a keystore to further secure the data in the business partition, and to encrypt voice and data communications made from that partition.

Its new fixed-line product relies on the same SD cards, central key infrastructure and SIP servers used by the smartphone system, but now works with modified desktop VOIP phones from Tiptel and Snom. The phones have a slot for the SD card encryption engine, and additional software that manages the card, and indicates when a call is secured. They will allow government officials to place secure VOIP calls between premises that are not themselves secure.

SecuSmart and its partners have not yet set a price for the new desktop phones. Quelle said it will be less than the price of a BlackBerry Z10 equipped with the secure SD card, but not hugely so.

While SecuSuite is gaining traction in the government market, it can seem overengineered and overpriced to enterprises that only want to encrypt voice traffic because they already have MDM (mobile device management) tools to adequately secure their email and data traffic, Quelle said. Another obstacle, he said, is that businesses are reluctant to replace their and their employees' existing smartphones with BlackBerry devices, and want software that works on all platforms.

It's reasonable to assume that enterprises concerned about voice encryption are already securing the platform and the data, and all that's needed is an end-to-end encryption system to prevent eavesdropping on calls, he said. That's what prompted the company to work with network operator Vodafone Germany on the Secure Call app for Android phones. The app will be ready before the end of the year, he said, echoing the timetable Vodafone gave when it announced the app. Vodafone plans to charge around €10 a month to use Secure Call.

Vodafone offers an existing voice encryption service, also developed by SecuSmart, as part of its Secure SIM offering. To use it, all callers have to have a SIM from Vodafone Germany. That's a problem for large companies that wish to dual-source services for security of supply or to obtain competitive prices, said Quelle, and it's also a challenge for multinationals with employees in other countries.

The new app does all the encryption and key management in software, and is not tied to either an SD card or to the SIM card. That frees up users to choose other operators -- and also frees up SecuSmart. For now, said Quelle, Vodafone has exclusive rights to the app in Germany, but in other countries SecuSmart is free to work with other distributors, operators or not.

The world's secret services may be about to find the massive interception of phone calls getting a lot harder.