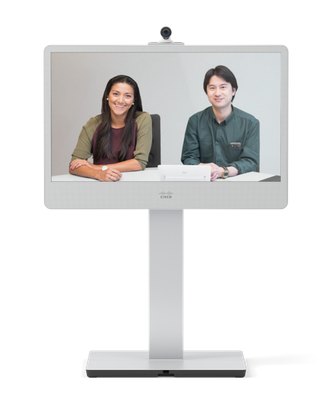 Cisco unveiled Wednesday an array of video conferencing products as it seeks to provide video collaboration systems for meeting rooms of all sizes.

Most conference rooms either lack video conferencing equipment altogether or have systems that don't work properly, so Cisco is going after that market opportunity, according to Rowan Trollope, senior vice president of Cisco's Collaboration Technology Group.

"We're not going to rest until every single room in every single business all over the world has extraordinary video conferencing and collaboration equipment. That's our mission," he said during a press conference.

While Trollope articulated Cisco's goal in hyperbolic terms, it's clear the company sees a big gap that's waiting to be filled, and it intends to go after what it views as a grossly underserved business video conferencing market.

Cisco isn't the only company focusing on this. Microsoft is also making a strong push with its Lync unified communications server, which can be deployed on customer premises and, with a subset of the functionality, accessed via the Office 365 public cloud suite. Other competing providers of UC and video conferencing systems in particular include IBM, Avaya, Siemens' Unify, Alcatel-Lucent, Mitel and ShoreTel.

Of course, Cisco has been a big player in video conferencing for years, catering to the low-end of the market with its WebEx line of products and to the high-end with its whole-room Tandberg systems. So in a sense, Trollope is indirectly criticizing the past strategies of his own company, which he joined in November 2012 from Symantec where he was group president of the SMB and Cloud Business Unit.

Cisco has traditionally provided a "no compromise" experience via its high-end "immersive" telepresence systems, but what's been missing is the ability to replicate that in conference and office rooms of any size, he said. His experience working in a consumer security company, he said, make him very aware of the need for products to be affordable and easy to use, and he's pressing that vision on his Cisco team.

"If you're going to have something for every single room in the world, it needs to be do-it-yourself," he said.

That way, business managers can unpack and set up the video conferencing equipment in the three or four conference rooms in their office area without need special technical help, according to Trollope. "What I'm driving for is making collaboration simple. That's my strategy," he said.

Cisco also wants its video conferencing products to take advantage of every screen and device available in a conference room, including those that are brought by meeting participants, like smartphones and tablets, and those already there, like flat panel monitors.

For small rooms, Cisco is announcing the second-generation version of the TelePresence MX200, an integrated, floor-standing system with an HD, 42-inch display, and embedded 4-way multi-party conferencing, and the TelePresence MX700 and MX800 systems for medium-size and large rooms, which support the H.265 video coding technology for reducing bandwidth without affecting image quality. The MX200 starts at US$17,900, while the other two start at $49,900.

The TelePresence SX10 Quick Set is a aimed at small and medium size businesses that have flat panel displays in meeting rooms, because its components can turn the displays into a video conferencing system in under 10 minutes, according to Cisco. It starts at $3,999.

Cisco also announced the Precision 60 camera and SpeakerTrack 60 dual-camera system, both of which work with many of the company's video conferencing products. The Precision 60, priced at $8,900 captures video at 1080p resolution at 60 frames per second, adjusts to different lighting conditions and has a zoom lens. The SpeakerTrack 60, priced at $15,900, detects the active speaker in a room and zooms in on the person, as well as follow the speaker if he or she moves.

The Cisco TelePresence SX80 is an integrator box for large rooms with non-conventional layouts that works with a variety of cameras, supports up to three screens and can be paired with the MX700 and MX800. It starts at $17,900.

Cisco is also announcing it will integrate several of its products with its new Intelligent Proximity technology, which will let the video conferencing systems detect mobile devices in the room, like smartphones and tablets, and gives users the option of linking them up to the session. Users will then be able to use their tablets and smartphones to do things like view shared materials, save slides and review content that has already been presented.

Cisco also announced that it has upgraded its Business Edition 6000 video and collaboration bundle for mid-market companies with a new 25-user "starter" license option and a new wizard installation tool that the company says cuts down on deployment time dramatically. Some of its components are the Cisco Unified Communications Manager for IP telephony, Jabber for instant messaging and presence, Unity Connection for voicemail, Unified Attendant Console for call routing, TelePresence Conductor for video conferencing management and WebEx Meetings for cloud web conferencing. Cisco also has a similar video conferencing bundle for larger customers. Called Business Edition 7000, it's for companies with more than 1,000 users.

All of the products announced are due to ship in the spring.