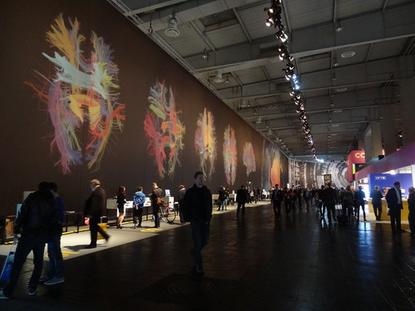 At Cebit 2014, a whole hall is devoted to the Code_n startup competition, where 50 companies are vying for the top prize of 30,000 euros.

Two companies using Facebook profiles to generate credit scores, their stands side by side at Cebit, are chasing different customers -- although they are competitors in the trade show's Code_n startup contest.

Kreditech, a two-year-old German company, uses customers' Facebook and other social media profiles to evaluate credit risk for its own loan business.

Next door is Big Data Scoring, an Estonian company with its data science team in Finland. It doesn't make loans, instead helping lenders reduce risk by factoring social media profiles into their scoring systems.

Venerable U.S. credit scoring agency FICO worried some in early January, when a report in the Wall Street Journal suggested it might one day consider using Facebook profiles in its credit scoring process. But the two startups here at Cebit say there are plenty of borrowers willing to share their profile information in the hope of getting a loan.

Once Big Data Scoring has permission to access the profile, it extracts work and education history data for the customer and their friends, and looks at their Facebook activity.

"We are not looking at photos or messages they have written, but at how many actions they take on Facebook each day," he said.

Lending institutions already collect information such as income and marital status about their customers, allowing them to identify the very best and the very worst. "With the information we provide, they can identify more good customers from the gray area in between," said Palomäki.

To develop its scoring system, Big Data Scoring divided customer repayment data initially provided by lenders into two, training the system with one half of the data and using the other half to verify whether its predictions about repayment risk were correct.

Basing credit scoring decisions on social media profiles may worry some, but it will be a bonus for others. "This is very interesting because credit rating agencies work with credit histories -- and young people or people in emerging markets have no credit history," Palomäki said.

Borrowers' willingness to share profile data caries by market. In South America, almost 100 percent are willing, he said, while in Poland between 30 percent and 50 percent are.

"In countries like Germany, it's quite low," he said. "It also varies with the incentives the lender is offering."

Big Data Scoring evaluates not just the borrower's profile, but also how long it took them to fill in the form, said Janne Liuttu, the head of the company's data science team. Forms filled in too quickly may be a sign of an automated attempt to commit fraud. The company collects far more data than it needs today, storing the rest to see how lenders' customers change their behavior over time, he said.

Loan provider Kreditech, founded in 2012, is not a customer of Big Data Scoring. Instead it has developed its own social media profile credit scoring system. Last year it considered -- and then rejected -- the idea of offering its system to other lenders as sort of white-label service. It is now wholly focused on making short-term loans up to €2,500 at interest rates of between 6 percent and 42 percent, according to public relations manager Laurent Schüller.

Those are the actual amounts of interest paid, not the annual rates, which can be in the thousands of percent. The credit simulator on Kreditech's Mexican site, kredito24.mx, shows that borrowing 1,000 pesos for one month will cost 417 pesos, an annual rate of 6,881 percent. That may seem steep, but in the payday loan market such rates are all too common.

Kreditech also lends money in Poland, Spain, Russia, and the Czech Republic, the regions where it has gained acceptance mirroring those for Big Data Scoring.

Next on the list is Peru, according to Schüller's colleague Marie Laggner. The company previously operated in Germany, "but it just wasn't interesting for us. It's already well covered by Schufa," she said, referring to Germany's 86-year-old credit scoring agency. Similarly, she said, the U.S. market is already dominated by FICO.

Kreditech has already built up a model of how social media activity influences credit risk. It uses established social networking profiles to verify the information would-be borrowers declare on their application forms, assuming that while someone might lie on a form, they are unlikely to bother faking years of postings in order to secure a small loan.

"We use up to 10,000 data points. The traditional rating agencies use only five to 12," Laggner said.

The company doesn't just look at Facebook: It also asks loan applicants for access to their Amazon.com and eBay profiles, as well as social media sites local to the countries where it operates.

"If someone claims to earn €5,000 a month but buys a book on Amazon about how to deal with financial problems, that would be a red flag," Laggner said.