The best encryption may conflict with the business model of Google and Facebook, speakers said at the show 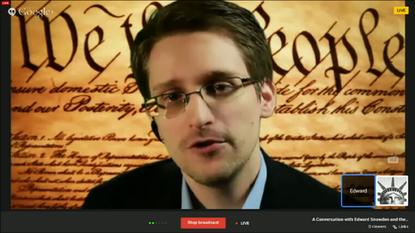 Edward Snowden speaks via video link to the SXSW conference on March 10, 2014

Encryption technologies can be a powerful tool against government surveillance, but the most effective techniques are still largely out of reach to the average Internet user, Edward Snowden said Monday.

"Encryption does work," Snowden said, speaking via satellite video from Russia at the South by Southwest Interactive technology festival in Austin, Texas. "We need to think of encryption not as an arcane black art, but as a basic protection in the digital realm," the former U.S. National Security Agency contractor said.

Snowden chose to speak at SXSW rather than before a legislative or policy group because it's the technology community that can really fix security and digital rights, he said. "This is something we should not only implement, but actively research and improve on an academic level," he said.

But now, the best encryption, like end-to-end encryption, often does not find its way into mainstream product and is not always employed by major Internet companies that depend on advertising.

Ideally, more companies would make strong encryption a default part of their services, without requiring action from the consumer, or burying the option several menus deep. It may be difficult, however, for companies like Google and Facebook to adopt the strongest encryption protocols like end-to-end encryption, Snowden said during a discussion about security with two representatives from the American Civil Liberties Union. Those companies gather lots of data about their users and use it for advertising. It's harder to gather that data when the endpoints are encrypted, the speakers said.

Since the disclosures began last June from documents leaked to reporters by Snowden, "companies have improved their security," said Chris Soghoian, a senior policy analyst with the ACLU Speech, Privacy and Technology Project. There is security, for instance, between user's computers and Google's servers, he said.

But it's difficult for major Internet companies providing a free service to offer end-to-end encryption because it conflicts with their business model, he said. And. unfortunately, the tools that offer secure, end-to-end online communications are not polished or easy to use, speakers said. "The tools designed with security as a first goal are often developed by independent developers, activists and hobbyists," he said.

After previously classified documents were leaked by Snowden, a number of large technology companies, including Google, Microsoft and Yahoo announced new protocols for encrypting users' data. But the problem is that one of the most commonly used encryption technologies, known as TLS (Transport Layer Security) is not all that strong against the intelligence gathering community, Snowden said.

TSL encryption, which is used by services owned by Google and Skype, encrypts communications at the point of transport and then the companies de-crypt and re-encrypt it, Snowden said. End-to-end encryption, on the other hand, forces intelligence-gathering groups to target individual computers, which are much harder to crack.

"I think that's the way to do it," Snowden said, speaking on the value of end-to-end encryption.

Some of the most advanced encryption technologies are difficult to use and they're not always free. Still, Snowden identified several steps Internet users can take to protect their data from surveillance. There's disk encryption, which protects data stored on hardware; there are browser security plug-ins like NoScript; and apps like Ghostery for Web cookie tracking, Snowden said. He also recommended Tor, which is designed to conceal online activity by routing Internet traffic through a networked relay system.

If people take those steps to encrypt their hardware and network communications, their online data would be better protected from massive government surveillance. But targeted surveillance is still harder to evade.

Snowden did not say that companies like Google and Facebook should not collect any data about their users. Rather, companies should not store data for long periods of time.

"You can do these things in a responsible way where people can still get value of the services ... without putting users at risk," he said.

The appropriate length of time that companies should retain user data was not, however, addressed during the talk.