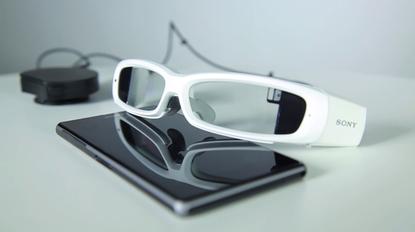 With Google Glass starting to pick up steam, Sony doesn't want to get left too far behind.

The Japanese company showed off its SmartEyeglass prototype at the Wearables DevCon conference just outside San Francisco this week, where it was trying to drum up interest among developers, who will need to build applications for the device.

Like Google Glass, SmartEyeglass displays information instantly in front of a users eyes. Unlike Glass, which has a small prism display, Sony's prototype looks more like a normal pair of eyeglasses and shows information in green over a pair of see-through lenses.

In a video to show off its capabilities, users walk into an airport and get sent directions to the check-in desk which pop up on their glasses. Other potential uses include displaying the latest score and players' names while watching a football game, sending and receiving texts and being notified of a missed call.

The glasses have a binocular-type display that makes the text look further away, which makes it more comfortable to read. They also have an embedded camera and a microphone and sensors similar to those in a smartphone, including an accelerometer, gyroscope and compass.

The device is still a prototype and not as advanced as Google Glass. It's operated via a separate, wired controller with a touchpad that has navigation, power and camera buttons. And the glasses currently work in conjunction with an Android phone. The applications for the glasses run on the phone, and interact with the phone over Bluetooth or Wi-Fi.

Sony said it's working on a software developer kit for the product, based on the same framework as its SmartWatch 2. But there was no word yet when the SDK or the prototype itself will be available.