Samsung's Milk music streaming service is free, has no ads

Samsung's Milk streaming service initially will work in U.S. and on Galaxy devices, but will be extended to other countries and devices 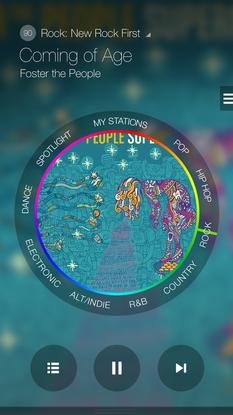 Samsung hopes its new Milk streaming service is the next big thing in music.

The radio service, announced on Friday, is available for free, with no ads, and users don't need a log in to use the service, said Daren Tsui, vice president of music at Samsung Media Solutions.

The Milk application is available through the Google Play store, and will initially work with Samsung's Galaxy smartphones and tablets. The company is, however, thinking about expanding its use to competing mobile devices, Tsui said.

The service will initially be available in the U.S., and will be expanded worldwide at a later date. It has 200 radio stations and 13 million songs, and in addition to functioning as a jukebox, allows users to create customized stations based on artist or genres.

Milk is targeted at competing music service like Apple's iTunes Radio service, which is available for free with ads and ad-free for US$24.99 via the iTunes Match service. Samsung is not yet providing an option to buy music, but Tsui said that idea is being researched. Meanwhile, the service could be one way to sell more tablets and smartphones. The app works with the AllShare feature, which allows streaming of music to TV sets and other Samsung devices.

Samsung worked with popular radio service Slacker -- which is ad-based and has a database of 10 million songs -- to develop the service. Samsung will also compete with other ad-supported free music streaming services such as Pandora and Spotify.

Milk covers a range of genres and songs, and has an interface designed to make it easy to find songs, Tsui said.

The Milk interface is centered around a dial -- which looks much like the software version of dials found on Apple's iPod Classic and Shuffle -- which can be customized to include favorite genres. The dial can't fit all 17 genres provided in the app, so users can select up to nine genres to fit on the wheel. The dial can be turned around to switch on a music stream from a specific genre such as dance, electronica or indie.

In a test of the service, the search feature was not able to find the song "Ghost Tonight" by Brooklyn-based Chairlift, but the service created a station and started playing songs from the band. It also successfully found a selection of songs from Thievery Corporation.

The search feature is "a way for you to find more of the music you love," Tsui said.

The service is new and may not have songs from more obscure bands, but more will be added to the catalog, a Samsung spokeswoman said. The songs sounded sharp, and there was no lag in playback when switching stations.

Milk also maintains a history of songs played for users to look up.

The Milk app in the future will be able to cache a station for hours of offline music playback, Tsui said.