TI targets enthusiasts with $US19.99 mini-computer for small electronics 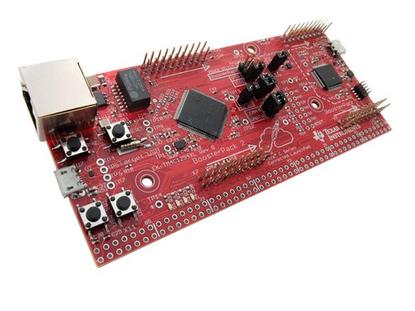 Texas Instruments is tapping into the growing trend among enthusiasts who want to make their own wearable devices and small electronics, announcing the Tiva C Series Connected LaunchPad mini-computer.

The $US19.99 mini-computer has a microcontroller to which sensors, displays, connectivity and memory components can be independently attached via expansion cards. The expansion cards, called "Booster Packs" by TI, can help in prototyping devices and testing applications.

The board could help in the creation of sensor gateways, home automation products, and other sensor devices that could serve as data-collection instruments. The board could aid in the creation of "cloud-enabled gadgets," according to TI. Such cloud-enabled gadgets could include wearable devices, such as health monitors and Wi-Fi-connected electronics.

TI did not return requests for comment on the board's capabilities.

Gartner in December forecast revenue from wearable electronics, apps and services for fitness and personal health would reach US$5 billion in 2016, increasing from $1.6 billion in 2013.

Such boards are good for prototyping and writing software for companies that want to build wearable devices, said Nathan Brookwood, principal analyst at Insight 64.

But with prototypes, programming can be a challenge because the devices don't, for instance, provide users with the sort of biometric data they get from devices for sports or health-care use, Brookwood said.

There is a growing demand for semiconductors like microcontrollers used on these boards, IC Insights said in a study released Thursday.

Features on the board include support for Ethernet, expandable memory capabilities and support for multiple communications protocols that are relevant in designing wirelessly connected electronics. The board has a 120MHz ARM Cortex-M4 processor, 1MB flash cache and 256KB of SRAM. It has two Booster Pack slots for expandability.

With an MCU, the processing capabilities of the board pale in comparison to Raspberry Pi, which has a faster ARM-based CPU and graphics core capable of rendering 1080p video.