Marvel Comics is offering a 30-day trial of its Marvel Unlimited subscription service for $US0.99 through March 14. 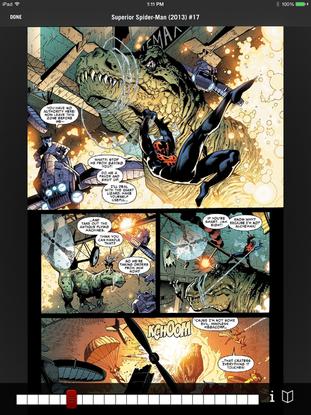 Marvel Comics is making its subscription comic service, Marvel Unlimited, available for 99 cents for the first month until March 14.

Marvel Comics is making its subscription comic service, Marvel Unlimited, available for $US0.99 for the first month until March 14. If you're a comic-book fan--either present or past--it's a great deal to try out Marvel's all-you-can-eat approach to comic reading.

I first signed up for Marvel Unlimited back in 2012 when rumors of its arrival on the iPad were everywhere. The company launched its iOS app in March 2013, and has been improving it steadily since then. An Android version also followed later in the year.

The Marvel Unlimited app isn't as sophisticated as Comixology's app, but I've found it to be a stable, solid full-screen reading experience for many months now. There's even an offline option that lets you cache up to 12 issues on your device for reading when you've got no Internet connection.

As usual, offers like this have caveats--you have to sign up for an autorenewing Marvel Unlimited account, so you'll need to cancel within 30 days in order to avoid being charged $US10 per month for the service. (The monthly charge is a sucker's bet, anyway--if you commit to an entire year the price drops to $69.)

Marvel Unlimited's catalog of more than 15,000 comics ranges from Marvel's '60s heyday to issues from just a few months ago. You won't be able to read the current releases (issues don't appear on Marvel Unlimited until several months after they've been in comic stores and on Comixology.) But unless you're a hard-core comic-store dweller, you may not care.

If you're a Marvel fan, it's a pretty good deal. I decided the service was worth $69 per year after a business trip to the east coast. I cached the beginning of Mark Waid's run on the new Daredevil comic on a whim--I'm not a fan of Daredevil, but I had heard good things about the run. Between those issues and various others I read on my flights to Boston and back, I calculated that in less than a week I had read nearly $60 worth of comics.

While Marvel Unlimited is kind of, sort of a "Netflix for comics," it's important to keep in mind that only Marvel's own comics are available on the service. No indie books or books from major-publisher rival DC are available. If your dreams are full of Spider-Man and Hawkeye, you'll be thrilled. If you prefer Superman, Batman, or Invincible, look elsewhere.

Still, at $US0.99 for a 30-day trial, it's worth checking out if you're intrigued. And here are some reading suggestions from our own Andy Ihnatko! If you get hooked, drop the monthly plan and go for the $69 annual option.