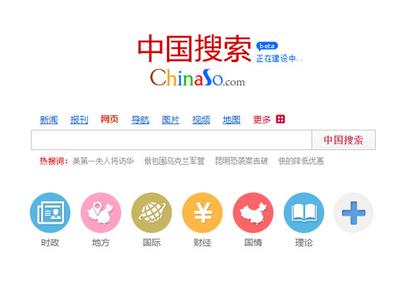 The landing page for China Search.

After previously struggling to crack the nation's search market, China's state press appears to be giving it another go with a revamped search engine.

A beta version of the site, China Search, went live on March 1. Details about its exact aims are scant, but the site has replaced two search engines originally developed by China's Xinhua News Agency and the People's Daily.

The state-controlled Xinhua and the People's Daily came out with their own search platforms, in 2011 and in 2010 respectively, but neither had managed to gain much influence in China's competitive Internet landscape. The market shares for both sites had been below 1 percent, not even registering on the search rankings at analytics site CNZZ.com.

The new search engine won't have an easy time attracting users. Baidu has long reigned as China's top search engine, with a 60 percent share, according to CNZZ.com. In addition, other more established Chinese Internet firms are competing in the space. Qihoo 360, a security vendor, has its own search engine which now has a 25 percent share.

Rivals including Microsoft also hope to expand their presence in China's search market. The U.S. software giant said in January the company is investing more resources behind its local version of Bing.

Google, which has a 1 percent share in China, in 2010 shut down its local search engine after repeated clashes with authorities over censorship.

The two former search engines, Xinhua's Panguso.com and the People's Daily's Jike.com now automatically redirect to China Search. Phone calls to the company behind the new site were not answered on Tuesday, but the firm is registered under the name of Zhou Xisheng, deputy chief of Xinhua.

Already, both the online versions of Xinhua and the People's Daily rank among the 15 most popular sites in China, according to Alexa.com. But most of the nation's online queries still go through Chinese search giant Baidu, which has its own news portal page.

So far the new search engine hasn't been promoted much, and Chinese Internet users have posted mixed reactions to it. On social networking site Sina Weibo, some insist users support China's homegrown technology, while others complain the site is a waste of money.