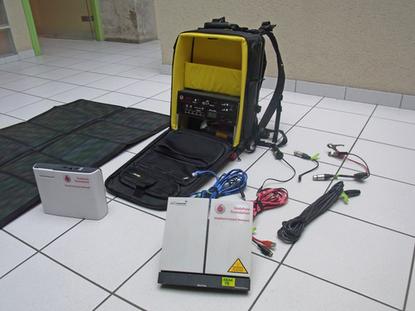 The Vodafone Foundation's Instant Network Mini contains everything needed for a small 2G GSM base station, including satellite backhaul, in a backpack.

Did you ever have one of those days when cell coverage was so bad you wished you had a base station on your back? The Vodafone Foundation came out with just such a device this week, but not to keep irritable iPhone junkies happy.

The Instant Network Mini, announced during the Mobile World Congress trade show in Barcelona, is a cell in a backpack that's designed to let telecommunications relief workers swoop in to disaster areas and restore service as residents regroup. It weighs 11 kilograms and can be carried as hand luggage on commercial flights, according to the social-investment arm of U.K. carrier Vodafone. Non-technical staff can unpack the bag and set up the components to start service, the foundation said.

The portable cell can provide 2G GSM coverage over a radius of 100 meters and carry as many as five voice calls at a time, as well as SMS (Short Message Service) messages. It connects to the wider world via satellite, according to a Vodafone Foundation news release. Through SMS, the system can also support mobile money services used in some developing countries.

The foundation has already put the concept to work with its Instant Network, a 100 kilogram cell that takes up four suitcases but offers a larger operating radius of up to 5 kilometers. It used that system for relief in the Philippines following Typhoon Haiyan last November, deploying two Instant Networks within 24 hours to help local carrier Smart Communications restore service in Palo, an area hit especially hard by the storm. Over the course of 29 days, those cells carried 1.4 million text messages and 443,288 voice calls, the foundation said.