Dutch authorities declined to say how the site was seized, if anybody was arrested and what was sold on the site 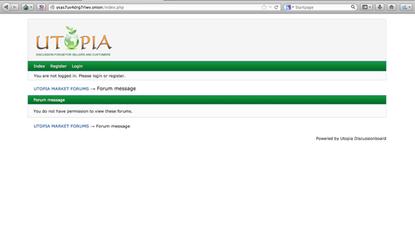 Utopia's forum could still be found on the Tor network

Public Prosecution Service spokesman Wim de Bruin declined to say how the hidden site was seized and if anybody was arrested. "We will share more information later this week," he said, adding that the prosecution service wouldn't give more information pending the investigation.

Utopia was a hidden website, only accessible through the Tor anonymity network, and was used to deal in illegal goods. De Bruin declined to specify what was sold through the site.

According to DeepDotWeb, which reported about Utopia's launch last week and the subsequent site seizure, it was meant as a replacement for the Silk Road, an Internet drug marketplace that was shut down by the U.S. Federal Bureau of Investigation last October. That site had more than 13,000 listings for controlled substances, including cannabis, heroin, methamphetamine and LSD, as well as firearms, stolen bank account information and forged identity documents, among other items.

As an indication of how difficult it can be for authorities to stop such marketplaces, Silk Road resurfaced in November.

After Utopia was seized Tuesday, a moderator of the Silk Road forums posted a message saying that Utopia's seizure "is a serious blow to the darkweb marketplace community." He called on users of the hidden market places to "regroup, and do it again."

"Show them that you, we, are a hydra -- cut off one head and ten more spring up," he wrote.

The Dutch police apparently did not seize Utopia's forum, which could still be found on the Tor network, though the contents could only be accessed by vetted users.

Four sites were seized by obtaining the administrator rights, according to the Public Prosecution Service at the time. The team did not manage to obtain administrator rights to other sites but deleted images from eight other hidden services, it said.