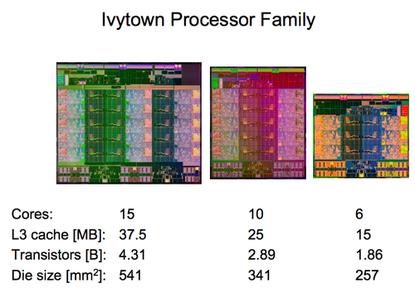 Intel has provided more details on its upcoming 15-core Xeon chip code-named Ivytown, which has 4.31 billion transistors and will go into high-end servers.

The Ivytown chip, which will be part of the Xeon E7 chip lineup, will likely be announced next week. Further details of the Ivytown were shared at the International Solid-State Circuits Conference in San Francisco.

With the highest core count of all Intel x86 server chips, Ivytown will likely be the company's fastest performing server chip. Intel put 12 cores on Xeon E5 v2 chips that shipped in the third quarter of last year.

The 15-core chip will likely go into 4- to 8-socket servers, which typically handle high-end computing tasks such as databases and ERP (enterprise resource planning).

Ivytown will run at frequencies ranging from 1.4GHz to 3.8GHz, and draw between 40 watts to 150 watts of power. Each core will support multithreading, meaning that one Ivytown chip will be able to run 30 threads simultaneously.

The core count of 15 is unconventional, considering chips usually have either 8, 12 or 16 cores. The cores are arranged across three columns, and the chip has 40 PCI-Express 3.0 lanes.

The 15-core chip brings Intel a step closer to AMD, which has topped off at 16 cores on its latest Opteron 6300 chips. AMD's first 16-core x86 Opteron chips code-named Interlagos shipped in 2011, but the company has not added additional cores to chips since.