Samsung isn't shying away from the high end of the tablet market. Its Pro tablets start at $400 and the company is taking preorders now. 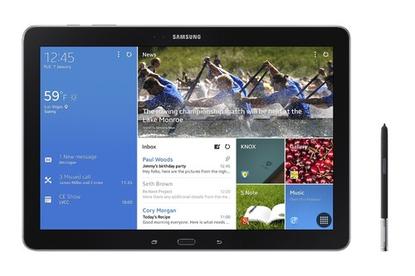 Samsung's Galaxy Tab Pro and Note Pro tablets will have professional-grade prices when they launch later this month.

Here's the USprice breakdown for all four tablets, which arrive in stores and online starting February 13:

The most interesting of the bunch, however, are the 12.2-inch Tab Pro and Note Pro, with screens that are much larger than what's typical for tablets. To take advantage of the extra real estate, Samsung's Multi Window feature will let users run up to four apps at the same time. Both tablets will also feature octa-core Exynos processors and 3GB of RAM. The main difference between the two models is the inclusion of an S Pen stylus in the Note Pro.

As for the Magazine UX, which displays home screen widgets in a tile-like view, it could be the last time we see this software on any Samsung products. Last week, Re/code reported that Samsung agreed to dial back its Android customizations due to pressure from Google, and may alter or dump Magazine UX in future devices. The report coincided with a broad patent cross-licensing deal between the two companies.

While most Android tablet makers are racing to the bottom on pricing, Samsung has never been shy about matching Apple's iPad, perhaps hoping that its software and brand recognition can set it apart.

Still, the $US750-and-up pricing of the Note Pro 12.2 seems especially bold, as it's not even clear whether there's a market for such huge tablets. If you fancy yourself a trendsetter, you can pre-order the Note Pro or any of Samsung's other new tablets straight from the company's website now.