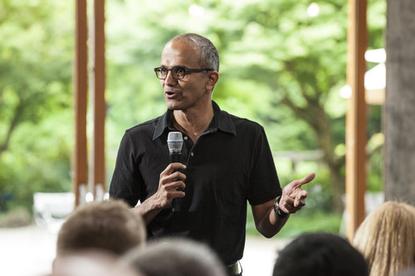 Microsoft has finally concluded its protracted search and chosen its new CEO: Satya Nadella, who as executive vice president of the company's Cloud and Enterprise group has successfully steered the shift of the company's back-end server software and tools to the cloud.

As he takes the reins from Steve Ballmer, Nadella becomes only the third CEO in Microsoft's nearly 40-year history. Chairman and co-founder Bill Gates was the first.

"During this time of transformation, there is no better person to lead Microsoft than Satya Nadella," Gates said in a Microsoft news release issued Tuesday. "Satya is a proven leader with hard-core engineering skills, business vision and the ability to bring people together. His vision for how technology will be used and experienced around the world is exactly what Microsoft needs as the company enters its next chapter of expanded product innovation and growth."

In Nadella, Microsoft has chosen a long-time, loyal insider who knows the company well and is reportedly well-liked by his peers and the staff. A twenty-plus year company veteran, he has risen through the ranks, most recently leading the group in charge of computing platforms, developer tools and cloud services.

What Nadella is not is an outsider, making his choice less compelling to those who believe that Microsoft needed someone with no prior history and attachments at the company who could shake things up.

Nadella took over what was then the Server and Tools division in February 2011, and has managed it successfully by all accounts, increasing its revenue while overseeing the transition to cloud computing.

Ballmer announced his decision to retire in August. It shocked many who had assumed he would stay on for several more years, especially after having announced a broad reorganization only a month earlier.

More than 100 possible candidates were initially identified, of which "several dozen" were interviewed before narrowing the list down to about 20, John Thompson, a board member and the leader of the CEO search committee, said in a December .

Some candidates were rumored to have taken themselves out of the running, citing concerns over the influence of Gates and Ballmer, who is one of the company's biggest individual shareholders. For a time, Ford CEO Alan Mulally was reportedly a front-runner, but he recently told Ford's board he had no plans to leave his job.

There was speculation that the board pushed out Ballmer, particularly when, a week after Ballmer shared his retirement plans, Microsoft announced an agreement with one of its biggest investors. The agreement gave ValueAct Capital the option of a seat on Microsoft's board, and in exchange it agreed not to wage a proxy battle or increase its shares above a certain level.

Some analysts said the deal reflected the dissatisfaction of Microsoft investors who are unhappy that the company's stock price has fallen about 40 percent during Ballmer's 14 years as CEO. Ballmer said at the time his retirement had nothing to do with ValueAct and that the decision to step down was his own.

He reiterated that position in November, when Ballmer and members of Microsoft's board told The Wall Street Journal he had decided to retire after becoming convinced a new leader was needed to help Microsoft get where it needs to be more quickly.

Among the other rumored candidates were Ford's Mulally; Kevin Turner, the company's COO and former CIO of Walmart and Stephen Elop, former Nokia CEO and former division president at Microsoft, who is due to return to Redmond when Microsoft's acquisition of Nokia's smartphone business is completed.

The new CEO will have to lead Microsoft through its transformation into a company that can sell more cloud services and hardware devices alongside its packaged software. That applies to both its consumer and enterprise businesses, as software moves to the cloud and devices like tablets and smartphones take on more tasks handled by PCs.

Products central to the transformation include Microsoft Xbox gaming console and Surface tablets, its Office 365 online applications and its Azure cloud infrastructure platform.

Microsoft will be selling more devices when it closes the US$7.2 billion Nokia deal. Nokia and Microsoft have partnered for years to make smartphones that run the Windows Phone OS, like the Lumia line. The new CEO will also have to oversee the integration of Nokia's staff and business with Microsoft, avoiding the problems that can often eclipse the benefits of such big acquisitions.

A major challenge for Nadella will be to make sure Microsoft continues to improve on Windows 8 and its Windows 8.1 update. The radical redesign of the flagship OS for PCs and tablets has received mixed reviews from consumers and business customers.

It's essential for Windows 8.x to improve Microsoft's weak position in the tablet market, where Microsoft has taken a beating from Apple's iPad and from tablets running Google's Android. That's why Microsoft revamped the user interface, optimizing it for touch screens.

Likewise, Microsoft's bold venture to develop its own tablets remains a work in progress. The second wave of Surface devices recently came out after the first generation failed to impress, particularly the version that runs on ARM chips and the RT version of Windows 8.

Another high-stakes project that's in the works -- and many say overdue -- is the delivery of a native, full-featured version of Office for the iPad and for Android tablets. It's a move some say Microsoft has been reticent to make for fear of hurting its Windows business.

Perhaps as important, Nadella will need to recognize new market shifts and lead the company to pounce on those opportunities early. Ballmer was faulted for failing to grasp the revolution that has made tablets and smartphones must-have devices. Earlier, under his watch, Microsoft failed to see the opportunity in online search that made Google a global titan, and the social networking craze that Facebook and Twitter seized upon.

Ballmer was also criticized for what some see as his slow reaction to enterprise cloud computing, although Microsoft has now recovered lost ground with products like Azure and Office 365.

Nadella inherits the ongoing restructuring of the company's operations, which was Ballmer's brainchild. That plan, called One Microsoft, is designed to make the company function more cohesively. However, some say an opposite approach is needed: to make its various business units more autonomous, because its product line has become so diverse, encompassing the Xbox and the enterprise SQL Server database.

Ballmer and the board are convinced that the One Microsoft reorganization will make the company more efficient and innovative, and ultimately a stronger competitor to Apple, Oracle, IBM and Google.

The reorganization dissolved the company's five business units -- the Business Division, which housed Office; Server & Tools, which included SQL Server and System Center; the Windows Division; Online Services, including Bing; and Entertainment and Devices, whose main product was the Xbox.

Those units were replaced by four engineering groups organized by function, around OSes, applications, cloud computing and devices, and by centralized groups for marketing, business development, strategy and research, finance, human resources, legal and operations.

The new CEO will have to see that reorganization through, since the board has said it supports the plan and will not scrap it.