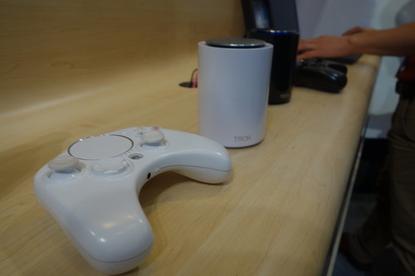 China's Huawei Technologies is planning on launching its Android gaming console in its home market during this year's second quarter, just after local authorities lifted a ban on video game sales in the country.

Huawei showed off its Tron gaming device last week at the International CES show in Las Vegas. The console can run Android games, and comes with Bluetooth wireless controllers. About the size of a soda can, it contains an Nvidia Tegra 4 processor.

The product's price is still being decided, but it could retail for around US$200, Huawei spokesman Scott Sykes said on Tuesday.

Huawei's game console bears a resemblance to Ouya, another compact Android gaming system that launched last year in the U.S. Huawei's product, however, is targeting the Chinese market, at a time when game console sales only recently became legal in the country.

Last September, China's government temporarily lifted its 13-year ban on consoles, as part of a new free trade zone being established in Shanghai.

Under the regulations, foreign-funded companies in the trade zone can sell game consoles to the rest of the nation upon receiving approval from China's Ministry of Culture. This has opened the way for Microsoft, Sony and Nintendo to officially sell their hit gaming devices to the country, although no company announcements have yet been made.

Despite the prior ban, electronic gaming has always been popular in China. Local consumers can still buy foreign game consoles from unofficial "gray market" dealers in the nation. In addition, many other Chinese consumers are playing PC or smartphone games, none of which have been banned by the government.

Chinese companies have previously dabbled in creating their own console-like gaming experience, either by bundling it into a smart TV or a set-top box. One such company, Beijing Eedoo Technology, even created a console that featured motion sensing technology to play exercise-related games. Eedoo Technology said its gaming system was designed for families and casual gamers.