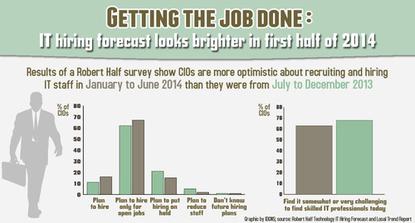 CIOs are optimistic about IT hiring in 2014.

Expertise in Web development, mobile development and large-scale data analysis will be much sought-after by IT hiring managers this year.

The clients of Doug Schade, principal consultant in the software technology search division at hiring firm WinterWyman, are especially interested in Web developers who know open source languages. In addition to Java skills, Ruby and Python development backgrounds are desirable, reflecting a development trend that de-emphasizes Microsoft languages, he said.

In the mobile space, experience with developing for Apple's iOS leads the way in desired backgrounds, said John Reed, senior executive director at staffing firm Robert Half Technology. There's also some demand for other platforms like Microsoft's Windows Phone, he said. Understanding how to create a site that can be easily viewed and navigated from a handheld device is just as important to employers as knowing how to develop a mobile application, he added.

With data analysis driving corporate spending "anyone who has experience in and around data is in a great spot right now," said Reed. This includes the standard database developer, data engineers who structure data with Hadoop and data scientists who make sense of that information.

Tech hiring in the new year will also include filling more traditional roles.

Companies may struggle to find people with software quality assurance backgrounds as they look to add those positions after cutting them during the recession. Employees who lost those jobs began new careers, reducing the pool of qualified workers, Reed said.

"The system kind of got purged of the specialists," he said.

IT security followed the same pattern and employers are now encountering a lack of security talent, he added. In a Robert Half Technology survey 14 percent of CIOs polled listed security as an area where finding qualified staff is challenging.

The survey also found that skills involving network administration, Windows administration and desktop support will be in demand in 2014. The number of these technical support positions is growing, said Reed.

"They're not as sexy, but [finding] people with strong skills in the tech support arena continues to be a challenge for our clients," he said. "All of these great technologies are only awesome when they work and when people can use them."

Cullen expects the stronger economy will mean an increase in project manager and business analyst hiring as companies add or expand projects to handle the work uptick.

The business opportunities that accompany the improving economy drive the need for tech workers, as enterprises seek to use technology to gain a competitive advantage, said Reed.

"As companies are investing in their business, IT is really getting the lion's share of the investment," said Reed.

But this need for tech talent also contributes to the industry's hiring struggles. IT's low unemployment rate, which Reed placed between 3 and 3.5 percent, indicates that a majority of IT workers have jobs since hiring professionals view 2 percent unemployment as full employment. By comparison, the overall U.S. unemployment rate for December was 6.7 percent.

"There is always 2 percent that's in transition [between jobs], that can't work or that don't want to work. Holistically there just aren't a lot of people out there to do those jobs."

In fact, Reed is seeing signs that the demand for tech workers may grow stronger in 2014. Salaries are rising "which is always a reflection of the supply and demand in the marketplace," he said. "The tighter the supply, the [more] compensation creeps up."

Although IT workers are needed, the demand for some positions isn't as strong.

Embedded systems development roles are starting to wane, said Schade, who attributes the decline to the rise of Web and mobile development.

Cloud computing, another trendy technology, is behind a decline in network telecommunication jobs, said Cullen. As more companies move some or all of their application to a cloud environment, positions that involve working on internal data and computer networks are decreasing.