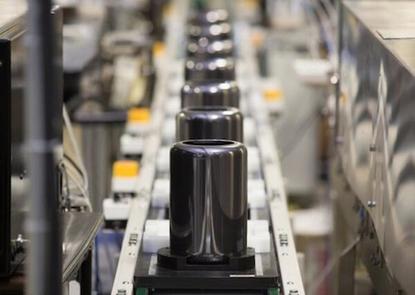 Apple's redesigned Mac Pro is being assembled at a Texas factory, the first Mac in decades made in the U.S.

On Wednesday, Apple said it would kick off orders of the Mac Pro today after teasing customers since June with images and descriptions of the radically redesigned machine.

When Apple's online store re-opened early today, ship dates were posted as Dec. 30. Within hours, the dates slipped to February, even for the two stock configurations, which start at $2,999 for a quad-core system with 12GB of memory, dual AMD FirePro graphics processors and 256GB of PCIe-based flash storage.

The shipping delays hint at low production volume, higher-than-expected sales, or both. The bet would be on the first, since the Mac Pro is being assembled in a new factory in Austin, Texas. Apple has touted the Mac Pro's built-in-the-U.S.A. attribute, most recently in a tweet by CEO Tim Cook Wednesday.

Some were disappointed by the quickly-slipping dates.

"February is a much later ship date than most of us were expecting," said a Computerworld reader in an email early Thursday. "The manner in which the Mac Pro was announced months ago implied that it would ship towards the end of the year, not just be available for ordering. Or, at least, that is what we inferred," the NASA employee added.

The Mac Pro situation smelled a bit like the iMac debacle in late 2012, when Apple announced the redesigned desktop, but then took weeks to deliver orders.

Cook ended up regretting the hasty iMac introduction, which was a major cause of a 22% decline in Mac revenue in 2012's fourth quarter compared to the same period the year before. "If we could run it over frankly, I would have announced the iMac after the turn of the year, because we felt our customers had to wait too long for that specific product," Cook said during a January 2013 conference call with Wall Street.

He defended Apple's Mac line three months later, rejecting the developing belief that the personal computer was a dead-end market.

The Mac Pro easily remained Apple's priciest personal computer. If a customer pulled out all the stops and configured the 10-in. black cylinder with the top-end Xeon processor -- a 12-core 2.7GHz CPU with 30MB of L3 cache -- 64GB of system memory, a 1TB SSD (solid-state drive) and the most expensive dual graphics processors, the price tag would hit $9,599.

Apple's redesigned Mac Pro is being assembled at a Texas factory, the first Mac in decades made in the U.S.