The company is looking for beta testers in the US 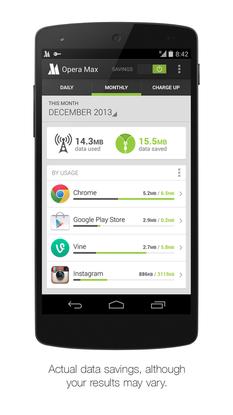 For many smartphone users around the world unlimited data usage is a thing of the past, but Opera wants to make limited data plans last longer with a new app called Max. Once the app is enabled, all non-encrypted data sent using HTTP is forwarded to the company's compression servers, which then optimize videos, images, and websites to use less data, according to Opera.

The amount of data saved depends on the applications used, the kind of media content users access and of course how much data a user consumes, according to Opera. The company won't be able to help Facebook addicts, because Facebook encrypts its traffic. But an image of the user interface shows how Max can decrease the amount of data used by other popular apps, including Chrome, the Google Play Store, Vine and Instagram.

Right now Opera is looking for beta testers in the U.S. that have smartphones running Android version 4.0, also called Ice Cream Sandwich, or later versions of the Google operating system.

"If you want more control over how much data you use and if you're curious about which apps are hogging your data plan, then you're the tester we want," the company said on its website.

For now Max won't be available outside the U.S. but Opera is working on expanding app compatibility and availability to other platforms and countries soon, it said.

The limited beta will available through Opera's Google+ Community page.