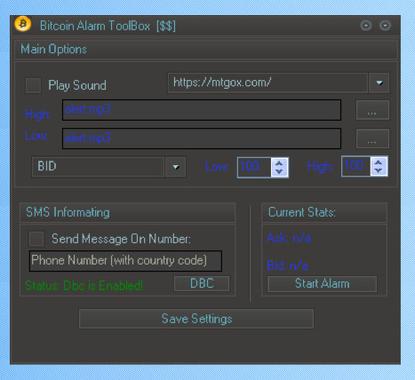 Bitcoin Alarm, an application that sends bitcoin market price alerts, contains suspicious functions that may be used to steal the virtual currency, according to Arbor Networks.

If you get a spam message advertising an application called "Bitcoin Alarm," the name may tell you all you need to know.

The desktop Windows application sends price alerts by SMS to a mobile phone. But closer examination of its code turned up several suspicious traits that indicate it may try to steal the virtual currency, wrote Kenny MacDermid, a research analyst with security company Arbor Networks.

Bitcoin's skyrocketing value this year has drawn wide interest from investors as well as from cybercriminals. Bitcoins are secured by public key cryptography, and if the private key for a bitcoin is obtained, the virtual currency can be stolen in a flash.

"I ignored it the first two times, but they must have really wanted me to look at it, so who am I not to oblige?" he wrote.

Tucked inside Bitcoin Alarm is a script that checks whether security software from Avast is running. If so, it stays quiet for 20 seconds. "It's a pretty solid chance that if software is checking for an antivirus engine, that it's up to no good," MacDermid wrote.

An encrypted file inside Bitcoin Alarm turned out to be a remote-access Trojan called NetWiredRC, which can be used to steal login credentials and, in this case, bitcoins, he wrote.

"This free utility is nothing more than malware with very low detection rate being spammed to anyone that might have a bitcoin sitting around," he wrote.

A website for Bitcoin Alarm was created on Nov. 19, according to data from Domain Tools. A YouTube video showing how to install the application was uploaded there two weeks ago. The demonstration video uses a Windows computer set for German.

Efforts to reach Bitcoin Alarm via an email address on its website were not immediately successful.