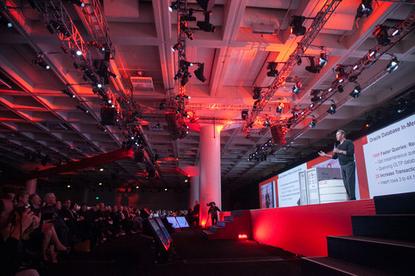 Oracle has launched the fifth version of its Exadata database appliance, claiming the release provides in many areas double the performance of previous-generation machines.

Compared to version X-3, Exadata X-4 provides a 77 percent to 100 percent increase in database I/Os per second; nearly 100 percent more Infiniband throughput; double the PCI Flash capacity, with up to 44TB in a full rack; up to 88TB of logical flash cache; and large increases in high-performance and high-capacity disk storage, according to Wednesday's announcement.

It's also possible to store "petabytes" of data in an X-4 rack using Oracle compression technology, according to a statement.

The increase in flash cache means that customers can hold "the vast majority" of their OLTP (online transaction processing) databases in flash, Oracle said. In fact, hundreds of databases can be consolidated inside one Exadata X-4 rack, according to Oracle.

While Oracle's hardware revenue has consistently fallen since the acquisition of Sun Microsystems, company officials have maintained Oracle is focused on selling higher-margin systems like Exadata, rather than attempting to compete with the likes of Dell and Hewlett-Packard on commodity servers.

A full-rack Exadata X-4 machine lists for US$1,100,000, while half-rack configurations cost $625,000, quarter-racks cost $330,000 and eighth-racks cost $220,000, according to Oracle's latest price list. However, those figures don't include the substantial additional cost of Oracle software licenses, which can push the price of a fully loaded Exadata well into millions of dollars.

There are now "thousands" of Exadata machines in use around the world, according to Wednesday's announcement. Oracle executives may give further details on Exadata adoption, as well as for other members of the company's appliance family, during its second-quarter earnings call next week.

Oracle is fending off competition from the likes of SAP's HANA, an in-memory database platform that runs on hardware from multiple vendors. Oracle announced an upcoming in-memory option for its flagship database at the OpenWorld conference in September, but it's not scheduled for release until sometime next year.

Oracle CEO Larry Ellison said customers who license the in-memory option will only need to "flip a switch" and instantly get "ungodly" performance improvements.