The year in tech quotes

As the year draws to a close, we offer a dozen of the quotes that stuck with us in 2013 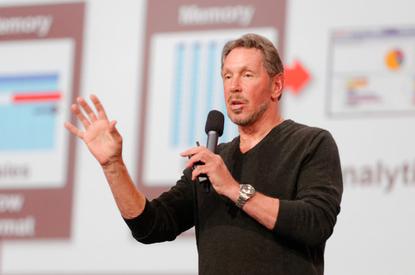 With 2013 coming to an end, we took our annual look back at quotes from news stories over the last 12 months. Here are a handful that stuck with us through the year:

"The concept of national security does not mean that 'anything goes': States do not enjoy an unlimited right of secret surveillance."

-- E.U. Justice Commissioner Viviane Reding, speaking after a meeting with US Attorney General Eric Holder in which they discussed revelations of widespread data gathering by the U.S. National Security Agency.

"It's hard for me to find a real harm with creepiness. I think a lot of my neighbors are creepy, but I don't think they're harmful."

This is a problem

"The only thing the judges seem to agree on is that we need more clarity, but they can't even figure out what that looks like. No one understands what the hell is or isn't patentable, including the ... federal circuit."

-- Julie Samuels, an intellectual property lawyer with the Electronic Frontier Foundation after the US Court of Appeals for the Federal Circuit ruled that an abstract idea cannot be patented simply because it is linked to a computer system.

"I don't know what was before the Stone Age, but that's what they're running."

-- NetSuite CEO Zach Nelson, announcing his company's plans to update its Cloud-based ERP (enterprise resource planning suite) for manufacturers, an industry area that is behind in Cloud adoption and reliant on "ancient" systems.

"I just figured two's better than one. Seriously, it's a large company. We have a separation of responsibilities."

-- Oracle CEO Larry Ellison answering a shareholder question about why the company has two presidents instead of one.

"The Chinese are like a tank through a corn field, they just keep mowing through it. Senators want sanctions against countries supporting cyberattacks."

-- Stewart Baker, a partner at law firm Steptoe & Johnson and a former assistant secretary at the US Department of Homeland Security, speaking at a US Senate subcommittee hearing in May, about cyberattacks by China.

Way worse than the blue screen

"Dying is a bad user experience."

"The fundamental fabric of the Internet has been destroyed. ... I assume that all big companies are now in cahoots with the NSA, cannot be trusted, are lying to us constantly. You cannot trust any company that makes any claims of the security of their products. Not one cloud provider, not one software provider, not one hardware manufacturer."

-- Cryptographer and security specialist Bruce Schneier regarding revelations that the NSA thwarted encryption of Internet communications.

The inmates have taken over the asylum

"I will not yield to this monkey court."

-- US Representative Frank Pallone Jr., a New Jersey Democrat, in response to Representative Joe Barton, a Texas Republican, who had asked Pallone if he would allow him to respond to Barton's assertion that Republicans were trying to "scare people so they won't apply" for insurance under Obamacare.

"We love people to come to our annual meeting. We even have cookies."

-- Ellison, apologetically responding to a shareholder who said it took three phone calls to Oracle's investor relations office to finally get an answer about the schedule for a shareholder meeting.

"Having finally crawled out from under the boxes, it appears to the undersigned that if anything was breached, it was this court's protective order, and that sanctions against Samsung and its attorneys are warranted."

-- USMagistrate Judge Paul S. Grewal of the US District Court for the Northern District of California, San Jose division, in a written opinion after he and his judicial colleagues went through boxes of documents from Samsung to determine whether an attorney leaked confidential information.

"Paperless hospitals are as likely as paperless bathrooms."

-- John Halamka, CIO of Beth Israel Deaconess Medical Center in Boston, speaking at a panel discussion about the use of health-IT at hospitals.

"If you want to do a protest you can do it outside, and it's better if you split it up that way so when that group gets arrested the other one can start."

-- Salesforce.com CEO Marc Benioff, when an on-stage interview with Yahoo CEO Marissa Mayer at the Dreamforce conference was disrupted by people protesting Wal-Mart labor practices. Mayer is on the Wal-Mart board.