Here's why Amazon drones may never land at your door 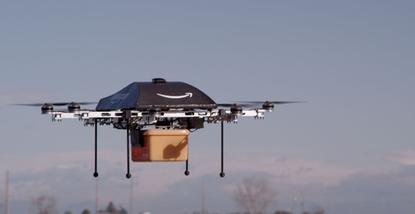 Amazon's ambitious plan to use flying drones to deliver packages is far-fetched, but not just because of technology limitations or air traffic regulations. Amazon's fulfillment center network, as it stands now, is too limited to serve even a tiny fraction of the U.S. in the method described by CEO Jeff Bezos.

Many of Amazon's fulfillment centers are based in rural towns where land for the sprawling warehouses is inexpensive. As Bezos said during his interview with CBS television news program "60 Minutes" the unmanned aerial vehicles (UAVs) would be able to deliver packages within a 10-mile radius of the fulfillment centers. That means if you're one of the 10,000 people who live in Coffeyville, Kansas or Campbellsville, Kentucky then you're in luck. But residents of New York, Los Angeles, Atlanta, Philadelphia, Washington, D.C., Chicago, Denver, San Francisco and other big cities can forget about Prime Air service unless Amazon expands its distribution footprint.

This map shows 60 distribution centers across 15 states. The blue circles around the fulfillment centers represent the 10-mile range of the drones. The default view shows how little of the country would be covered by the proposed service. Technical and regulatory issues aside, this is a serious limitation.

The 10-mile delivery radius for the drones shown in the Amazon video seems quite literally a stretch, according to Colin Guinn CEO of DJI Innovations, a Texas based company that makes unmanned aerial cinematography systems for commercial and recreational use.

"The [Amazon] video is by far the most fleshed out proof of concept yet," Guinn said. "But with the system they showed, a 20-mile round trip on a single charge isn't possible with today's technology."

He said that the system Amazon presented would carry a five-pound payload for a maximum flight time of about 15 to 20 minutes. "That would amount to maybe about a five-mile delivery radius," he said, adding that a 10-mile radius might be possible in about a year from now.

Guinn said another potential problem is choosing where exactly the drone will land to deliver the package. He said it could run into obstacles that aren't pictured in a satellite view of the delivery site, for example a newly planted tree or kids playing in the driveway.

"Obviously obstacle avoidance will be built into the drones," Guinn said. "What customers could also do is choose a specific landing spot when ordering, like the back yard or driveway." Offering a spot clear of obstructions could help the drone avoid accidents.

Still, even if the drones could fly 20 miles from fulfillment centers, only a tiny part of the country could be serviced.

To give Bezos the benefit of the doubt, it's possible that Amazon could build a network of secondary distribution centers in major cities by 2018. There's also the possibility that the limited availability of Prime Air is by design. Limiting service to smaller cities and towns would mean that the drones could avoid the crowded airspaces of major metropolitan areas. It remains to be seen how the U.S. Federal Aviation Administration would govern autonomous drones since current commercial aircraft are in constant contact with air traffic controllers when they're above major cities.

"There will need to be redundancies and fail safe systems on board the drones," said Guinn. "Proximity to commercial airports will be a big factor."

Asked whether DJI was approached by Amazon regarding UAV technology, Guinn said it's not something that he could talk about, but did say some of the shots in the Amazon video were obtained using products from his company.

Like Bezos, Guinn agrees that regulations will be the last piece of the puzzle. Guinn said that a lot of people have dreamed of this kind of scenario and that it's encouraging to see Amazon move forward with it.

"There's no question that UAVs will be used for things like this," he said.

Nick Barber covers general technology news in both text and video for IDG News Service. E-mail him at Nick_Barber@idg.com and follow him on Twitter at @nickjb.