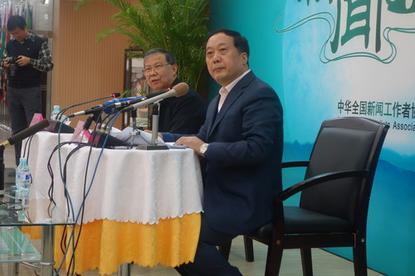 China's recent crackdown on online rumors may have quieted the nation's social networking websites, but local authorities take that as a sign of progress and want to regulate the Internet even more.

In a rare question-and-answer session, Chinese official Ren Xianliang spoke at length with journalists on the nation's efforts to control the Internet. Few details were given, but China plans to exercise greater authority over the nation's social networking services, including Sina Weibo and WeChat.

"You brought up that Sina Weibo's activity has fallen, but this just means that our crackdown on online rumors has been effective," said Ren, who is the deputy director of China's State Internet Information Office. "The rumors have declined significantly, but this hasn't affected the normal flow of information," he added.

Ren spoke to the media two weeks after the government said it was falling behind in managing the online flow of information. China already is notorious for blocking popular websites such as Facebook, YouTube, and Twitter as a way to weed out anti-government content. Locally, domestic Internet firms must self-censor, and often delete user posts on sensitive topics.

China's Internet populace, however, is growing at a fast pace. The country now has 604 million users, according to Ren. Half those users are either on microblogging sites such as Sina Weibo or using the mobile messaging app WeChat, he added. As a result, China's social networking platforms are generating billions of posts each day.

"Our work in managing this has to catch up. We are specifically targeting social media, and we are forming the specific systems and laws to regulate it," he said without elaborating.

In recent months, China has cracked down on online rumors, claiming that the content is inaccurate or slanderous. As part of those measures, China will even jail users found guilty.

The strict measures have often put China in a negative light when it comes to online censorship. But local authorities view the matter as maintaining stability and removing harmful and illegal content from the Web.

Authorities also want to maintain free speech for Internet users, but Ren indicated there would be limits. "I think people want to hear constructive comments, not personal attacks or a diatribe," he said.

China has often been mum on why certain sites are blocked, or how it manages its online censorship, and Ren declined to offer details. However, covering topics such as China's governing systems or matters that threaten the country's stability will require companies and websites to follow regulations, he said.

"We of course welcome Facebook-like sites to come to China, but they must follow the relevant laws," he added.