Another Apple supplier faces criticism over labour conditions in China 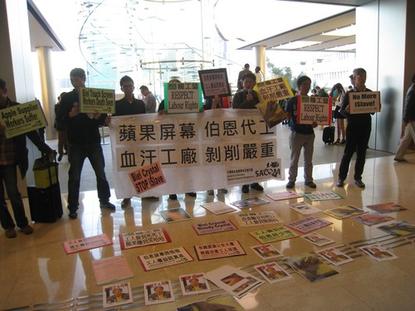 A manufacturer of glass coverings for Apple is drawing accusations of worker exploitation from Hong Kong labor groups concerned with several employee suicides at its factory in China.

Hong Kong-based Biel Crystal Manufactory Limited is a listed suppler for Apple, and produces protective glass coverings used on mobile phones. The company's factory in Huizhou, China, however, has been the site of "numerous labor abuses", according to a report from Students and Scholars Against Corporate Misbehavior (SACOM).

Employing about 40,000 workers, the factory produces glass coverings mainly for Apple, but also counts Samsung as a client. To be hired, employees at the factory are allegedly required to sign an application asking for voluntary overtime. As a result, workers tend to log 11-hour work days, including over the weekend, SACOM said.

The factory also allegedly denies injured workers proper compensation, and has set up a strict punitive system to keep employees in line, according to SACOM. Employees are fined for not reaching production targets, falling asleep at work or breaking the glass used in the manufacturing.

SACOM conducted its investigation through interviews with 60 workers at Biel Crystal's facility in Huizhou. In addition, the group claimed it learned of at least four suicides occurring at the factory this year. The latest happened in October, when a male worker, who had seen his wages suspended, jumped from a company building, SACOM said.

On Monday, SACOM and three other labor groups protested outside Biel Crystal's headquarters in Hong Kong and at an Apple store in the city. The groups are demanding Biel Crystal make changes, and that Apple ensure its supplier meets labor standards.

Neither Apple nor Biel Crystal immediately responded to requests for comment. Apple's staff is on Thanksgiving holiday until Dec. 1. The U.S. tech giant has been working to cap the work week among workers at its suppliers to 60 hours. Apple also regularly audits its supplier factories for labor violations.