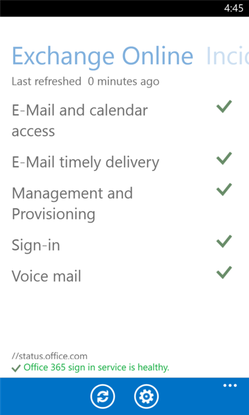 IT administrators of the Office 365 cloud email and collaboration suite will now be able to check their management console from their mobile devices.

Microsoft released on Thursday a Windows Phone 8 version of the new Office 365 Admin app, and versions for iOS and Android devices are due in the coming weeks, according to the company.

The Office 365 Admin app lets IT pros check the uptime and performance status of the suite's applications, which are hosted in Microsoft's public cloud data centers, as well as adjust certain user and system settings. To use the app, users need to have administrator rights for an active Office 365 domain.

Microsoft also announced that it has added a feature to SharePoint Online, Office 365's collaboration server, designed to simplify how users share documents with people outside of their organization.

The feature lets users generate with one click a "guest link" to a document that they can send to anyone they wish to share it with. Documents can be stored in users' SkyDrive Pro cloud storage bin or in their SharePoint Online document library.

Links can be for only viewing the document or they can confer editing rights to the recipient. The sender of the link can disable it at any time, so that it can no longer be used to call up the document.

Finally, Microsoft also alerted Office 365 customers that in the first calendar quarter of 2014 it will release a new version of its Exchange Hosted Encryption (EHE) service.

Now called Office 365 Message Encryption, the service includes everything that's in EHE today plus new features like the ability to apply custom branding to encrypted messages, according to Microsoft.

Office 365 Message Encryption will be included at no extra cost with some editions of the suite and be a paid option for others.