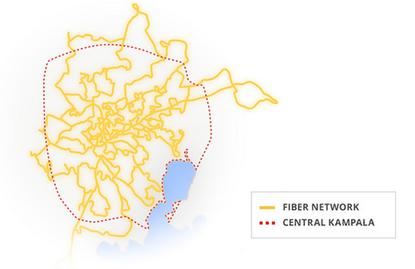 Google has kicked off a project to build high-speed fiber-optic networks in parts of the world that lack fast broadband connections, starting with the Ugandan capital, Kampala.

The initiative, dubbed Project Link, aims to provide faster and more reliable Internet connections in areas where the current infrastructure is inadequate or nonexistent, the company announced Wednesday.

It picked Kampala because it's a dense urban center limited to "pre-broadband" speeds.

Google is involved with several projects around the world to provide faster broadband access, moves that indirectly help its business. It said it wants to help local businesses, schools and others to make better use of the Internet.

Google's fiber-optic network in Kampala is designed to help Internet service providers and mobile operators connect their customers to existing high-speed undersea cables that carry traffic to and from the continent.

Project Link is a business for Google. ISPs and operators who sign up for the service will pay fees, a Google spokeswoman said, though the company isn't disclosing specifics.

It's not saying yet if it plans to also build networks in other cities. For now, it's focused on serving the 3 million people in and around Kampala, the spokeswoman said.

Beyond basic access, local providers will be able to offer new mobile data plans or high-speed Internet to support new services. With a fast fiber-optic network in Kampala, for instance, ISPs can better support the city's entrepreneurs, Google said.

Google has already built some of the network in Kampala. It started with 100 kilometers in the city's center and is building out from there toward Entebbe, where the closest international airport is located, Google said.

There are plenty of other areas where Google might want to expand Project Link. Of the 7 billion people on the planet, only about 2.7 billion are connected to the Internet, Google said. In Africa alone, only 16 percent of people are connected, according to Google.

Besides Project Link, Google is experimenting with high-altitude balloons to bring wireless networks to emerging markets in places like sub-Saharan Africa and Southeast Asia. And in the U.S. there's Google's Fiber broadband Internet and television service.