Passengers will get mobile Internet access, but they'll have to pay roaming charges 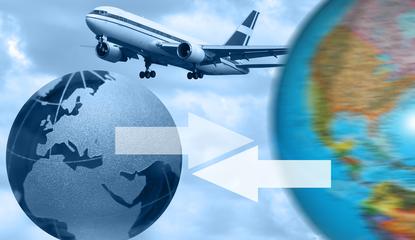 The European Commission gave airlines permission to offer their passengers Internet access via 3G and 4G connections so they can send emails and surf the Web while in flight.

"This means that from now onwards, spectrum for 3G (UMTS) and 4G (LTE) communications may be used above an altitude of 3,000 meters. Until now only 2G (GSM) has been permissible on-board aircraft flying in the E.U.," the Commission said in a news release on Thursday. To enable this, new rules have been adopted for aircraft flying over the European Union.

The Commission's announcement follows a decision by the European Aviation Safety Agency (EASA), which said on Wednesday that it will allow the use of personal electronics such as tablets, smartphones and e-readers during all phases of a flight. The rules will apply to all devices except bulky ones like laptops, which still need to be stowed during take-off, landing and taxiing, EASA said.

The agency will issue guidance on in-flight use of devices and the use of mobile broadband connections by the end of November.

The moves come in response to increasing demands from passengers, who have shown more interest in writing text messages and emails than in making voice calls, the Commission said, adding that the amount of data transmitted on board already exceeds voice traffic.

Airlines will remain in charge of the services they choose to offer on board, according to the Commission.

To give passengers mobile Internet access, airlines need to equip planes with an improved mobile communication on-board aircraft (MCA) system that makes use of pre-existing spectrum bands for 3G and 4G, the Commission said. These systems are connected with the ground via a satellite connection and have a signal with limited power to ensure there is no interference with other communications, it added.

Connecting to mobile Internet while flying over Europe could be costly. Passengers are billed for roaming charges through their service provider, the Commission said. "The tariffs applied usually correspond to 'Roaming: rest of the world' prices," it said.

Aircraft offering the service have a Network Control Unit on board that works like a jammer that prevents mobile devices from connecting to and interfering with ground-based systems. They ensure they connect only to an Aircraft Base Station, which is the antenna to which mobile devices connect and runs as a cable through the cabin, it added.

For safety reasons, these services are only available at altitudes above 3,000 meters, the Commission added.