The phone will ship in over 30 markets 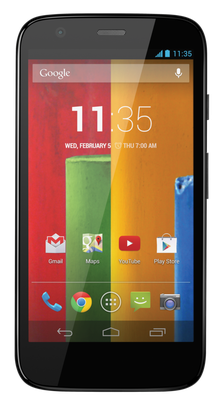 Motorola's Moto G will be available in over 30 countries.

Google-owned Motorola Mobility is setting its sights on worldwide adoption of the Moto G, which has a 4.5-inch screen and is priced from US$179 without a contract.

Most people in the world can't afford a smartphone that costs $500 and $600, and in fact the average cost is around $200, according to Dennis Woodside, CEO of Motorola Mobility. While there are many smartphones in this price range, however, they are far from good enough, he said.

Motorola wants to change that with the Moto G. The device is powered by a 1.2GHz quad-core processor from Qualcomm and has a 4.5-inch 720p screen that's "splash proof." Other hardware specifications include a 5-megapixel camera and options for 8GB or 16GB of integrated storage.

With the combination of the screen, good battery life and price tag, Motorola wants to take market share from competitors like Samsung Electronics.

Like the existing Moto X, people can choose the color of the Moto G's removable back cover. The red, white, blue and yellow color options, however, are fewer than what is offered for the X.

On the software side, the device runs Android 4.3 with some "minor customizations," and will be upgraded to Android 4.4 by January next year. Motorola hasn't added its own user interface on top of Google's, but has worked to improve battery life and added its own camera app. Users also get 65GB of online storage.

Taking aim at this segment of the smartphone market is a good strategy, according to analysts.

"If you look at the worldwide smartphone market, you'll notice that a majority of the volume and the growth comes from mid-tier of the market, especially [devices] that cost about $200. They are in huge demand ... so it makes sense for Motorola to go into that segment," said Anshul Gupta, principal research analyst at Gartner.

To keep up, Motorola doesn't just have to develop a good product, said Francisco Jeronimo, research director for European mobile devices at IDC.

"It needs to invest a lot more in Europe, because brand awareness is very low at the moment. So it needs to make a huge investment to change that," Jeronimo said.

But he still thinks that Motorola has a better chance at competing in this segment of the market rather than at the high end, where Samsung and Apple dominate. Motorola has continued to struggle since it was acquired by Google. Its revenue fell by 33 percent in the third quarter compared to the same period last year even though a record number of smartphones were shipped during that period, according to IDC.

Motorola's share of the worldwide smartphone market was 1 percent during the third quarter, compared to 2.1 percent in the previous year, according to Jeronimo. Its market share in Western Europe dropped to just 0.1 percent