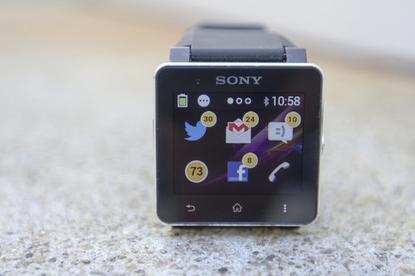 Don't look now, but Sony has quietly released a new smartwatch, and I'm almost surprised to report it's not a total disaster.

Compared with Samsung's just-released and almost universally criticized Galaxy Gear, Sony's SmartWatch 2 has much more modest ambitions. It doesn't overreach with a zillion half-baked features, and as a result it stands a fighting chance of restoring a semblance of credibility to the entire smartwatch category.

The SmartWatch 2 doesn't shoot photos or video. It doesn't respond to voice commands. And it doesn't have a microphone, so you can't use it for phone conversations that look something like this. But those are all features that often feel like beta experiments in the Galaxy Gear. The SmartWatch 2 honors simplicity over feature depth, and the result is a gadget that's only intermittently frustrating, not consistently frustrating like Samsung's take on the smartwatch concept.

Strap the SmartWatch 2 to your wrist. Use it to check notifications of who's emailing, texting, or calling you. It offers few thrills, but imposes a little less pain than its direct competition does. And maybe that's something of a moral victory in today's screwed-up smartwatch market.

Smartphone support for (nearly) all

I'll try not to pit Sony's watch against Samsung's watch at every turn, but I need to clarify three major differences up front. First, the SmartWatch 2 works with any phone running Android 4.0 or later. This feature is significant, because at press time the Gear pairs only with a single phone, the Samsung Galaxy Note 3 (though support for more Samsung phones is imminent). The SmartWatch 2 also offers significantly more battery life than the Gear: between three and seven days as opposed to a mere 12 to 24 hours. And at $200, the SmartWatch 2 costs a full C-note less than the Gear.

These are important distinctions. Both watches depend on smartphones for their key functions, so Sony's liberal, big-tent approach to hardware compatibility is welcome. And don't underestimate the importance of battery life: If your smartwatch can't even last through the day, you don't lose only its mobile-app functions--you also lose the display on your wrist that shows you the time.

Sony's 1.6-inch LCD screen isn't spectacular, but it gets the job done. Resolution comes in at just 220 by 176, and a certain pixely graininess will remind you of what mobile gadgets looked like before Retina screens showed us a new way of living. On the plus side, off-axis viewing isn't horrible, and I found I could easily read the display in direct sunlight.

The watch's design aesthetic is unapologetically nerd-tech, complete with a stark black bezel, rounded corners borrowed from Sony's Xperia phones, and a thin strip of blingy, polished metal running around the edge of the watch face. The whole affair reeks of 2005. Or maybe something you'd find in a Brookstone catalog.

Is this the kind of thing you'd put on your wrist? Would you give up your Swatch or Timex to wear this watch instead? Only you know the answer. But I think we can all agree that the watch's size and shape make a shouty statement (the body measures about 1.6 by 1.6 inches), and many potential customers will outright dismiss the gadget because it doesn't suit their style.

Personally, I like the physical power button on the side that turns on the display's backlight. It evokes the crown of an analog watch, and helps to de-nerdify the overall design. But I'm much less impressed with the plastic tab that covers the USB charging port and prevents the SmartWatch 2 from bricking if you drop it into a bucket of water. Prying open the cover is nearly impossible without using a razor blade or an X-Acto knife. That's a pain point, considering you'll need to access the port every time you charge.

When you're not directly engaging with one of the watch's apps, the LCD functions as a basic timepiece, displaying an always-on watch face without any backlighting. You get five built-in watch faces (I think the analog replicas look cheesy compared with the simple digital display), and you can download more faces via Sony's Smart Connect app on your phone. A number of apps come preinstalled on the watch, but if you want to install more or to manage behaviors for existing apps, you'll need to extricate your phone from your pocket and do all of that in Smart Connect. The process is a pain in the butt, but is standard smartwatch fare, sadly.

Click the power button, and the SmartWatch 2 comes to life. A single click turns on the backlight. A double click shoots you to the home screen. There you'll find three sliding panes, each supporting up to six app icons. Also on the home screen are icons for the battery level, the Bluetooth status, and the current time. On the bottom bezel sit Android's familiar Back and Home buttons, along with an Actions button that lets you choose how to sort your home-screen icons and define options in various apps.

Navigating the UI is a relatively straightforward affair. The touchscreen is serviceably (but not perfectly) responsive to finger taps, and apps launch quickly enough, without any undue lag or drama. Obviously, the display is way too small to support an on-screen keyboard, so the watch's app functions are all tied directly into simple notifications and brief--very brief--snippets of content.

When the handset in your pocket receives a phone call, a text message, or email--or even a new Twitter or Facebook update, because, yes, the SmartWatch 2 directly supports those services--the watch will come alive with a visual notification of the incoming signal. The notifications remain on screen for just 10 seconds, so you'd better glance at your watch as soon as you see the display light up. Otherwise you'll miss the notification entirely.

If you find yourself missing the watch's visual alerts, you can set it to vibrate during notifications as well, but this is an all-or-nothing, blunt-force approach that quickly becomes annoying. After about two hours of use, I grew tired of constant buzz alerts for email and Twitter updates, and toggled the setting off--thus killing vibrations for everything. I would have preferred a way to limit vibrations to just phone calls and text messages, but the interface doesn't offer that level of control.

Hello? Did I do something wrong?

There's also little transparency in how the watch decides which incoming signals will appear as notifications. For example, my 360-odd Twitter follows must generate at least 100 tweets an hour, yet only a very small percentage of their updates ever made it to the smartwatch in the form of notifications. Is that by algorithmic design? Is the watch cherry-picking what it believes to be the most important tweets? Sony offers no explanation in any documentation, but after extensive experimentation I was able to determine that the watch doesn't update its Twitter app in real time. The most aggressive update setting will grab new tweets every 15 minutes, and the watch simply elevates the most recent tweet in its latest update batch to notification status.

Or at least that's my theory, as I have no way of knowing how the watch really handles notifications. And because the entire system is so opaque, I didn't know what to think when Gmail updates stopped coming in altogether. Was the app behaving correctly, according to its own convoluted rules, or was something broken? The answer wasn't clear. But after going through the laborious process of uninstalling and reinstalling the Gmail smart-extension app--something that has to be done in Google Play, as an uninstall option isn't available in Sony's Smart Connect app--I was able to get Gmail updates working again.

At least phone-call and text-message notifications always consistently hit my watch face, fulfilling the prime benefits of having a smartwatch in the first place. When a phone call comes in, the notification shows you the name and number of the person who is calling, along with controls to mute your smartphone's ringer, reject the call outright, or reject the call but respond with a predefined text message.

Text-message notifications appear at full length, accompanied by options to quickly reply with an emoticon or with one of eight predefined templated messages that you create and edit on your phone. Again, you have no on-screen keyboard or dictation function, so you can't write and send texts from the watch, let alone compose tweets or Facebook updates. But as a simple bridge to your phone, the SmartWatch 2 offers an easy-to-understand, just-good-enough interface for managing calls and messages when you're stuck in a meeting or otherwise occupied.

Digging into the home screen itself, each app icon includes a badge that displays how many unread updates are waiting for you, and as you drill down into actual content, you get a short snippet of text rendered in a minuscule, blurry font. Embedded links are unclickable, of course, as the watch includes no Web browser. But that too is par for the smartwatch course.

Now, you'd think the entire scheme would be annoying, but I actually found some value in swiping through new email messages, tweets, and Facebook updates from a gadget on my wrist. You'd be hard-pressed to find more rudimentary expressions of these key services anywhere else in the mobile universe, but none of the app interfaces feel outrageously convoluted or forced. It would be nice, however, if Sony provided screen-timeout options, as the display will return to its watch face if you leave it untouched for longer than 15 seconds. Even worse, when you reactivate the display, the watch always kicks you back to the home screen instead of the app you were just accessing. That's just plain madness.

Slowly, we inch closer to a tenable smartwatch

Practically sneaking in during the dead of night, the SmartWatch 2 was never introduced to the world during a glitzy press event, and it's not being supported by an expensive ad campaign. It's almost as if Sony were trying to hide something from a public that is already voting no on smartwatches.

Ironically, though, the SmartWatch 2 feels just a bit more polished, finished, and all-around sensible than the Galaxy Gear. Sure, it's riddled with problems, and the display doesn't match the visual clarity of Samsung's. But its UI is comfy and familiar, and its feature set, however limited, essentially accomplishes what it sets out to do. Voice-enabled text entry and "wrist phone" functionality would be nice in any smartwatch. But when those features fail to deliver--as they often do in the Galaxy Gear--they're not just annoyances that can be shrugged away. They make you hate your watch.

In that regard, the SmartWatch 2 is a less offensive product. I would never swap it for the TAG Heuer on my wrist, but I can see how people completely reliant on text messaging and voice calls might find it useful. The world's smartwatch engineers might find it useful too. They should study the SmartWatch 2, tear apart its UI, and poke and prod at its every success and failure. Slowly but surely the smartwatch concept is inching closer to a winning combination of design, simplicity, and utility. The smart people in R&D just need more conflicted, imperfect products like the Galaxy Gear and the SmartWatch 2 to show them a better way forward.