Instagram sees its service becoming more Twitter-like in the future 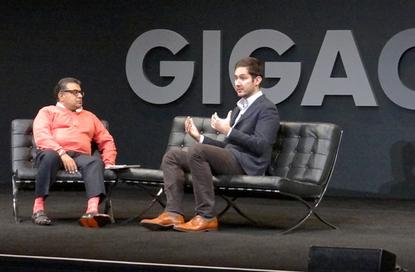 Although Instagram users do not commonly turn to the site to find out what's happening in the world, CEO Kevin Systrom hopes that will change.

Instagram may be trying to become a photo-heavy version of Twitter, a major rival service. One of the company's biggest goals is to figure out how to better use the 55 million photos its users upload each day to describe what's going on in the world, Systrom said Wednesday at the Gigaom RoadMap conference in San Francisco.

"How do we surface live events overseas, tell you there's rioting in London, or let you turn to the World Series?" Systrom said in response to a question from Gigaom founder Om Malik about the future of Instagram, during an on-stage chat. "If it's about what's happening in the world visually, how do we let you discover that?" Systrom said.

Right now, discovering new content on Instagram is awkward with the site's existing hashtag and user search functions. "It's really hard to find the content you want to find without being good at searching through hashtags," Systrom said.

To achieve its vision, Instagram said it would need to make better use of location and proximity data. To do that, the company needs to balance the need for privacy with the benefits of providing location information to the Instagram app, Systrom said.

"I'm sure all of us would like to see what's happening across the world as it's happening, but then you need location data," he said.

Other ideas on the table for Instagram include new ways to tag different elements in photos -- such as products -- now that advertisements are part of the service, Systrom said.

Instagram has had strong growth since the company was acquired by Facebook last year. At the time of the acquisition, Instagram had nearly 30 million users and now has 150 million-plus active users. Instagram has around 60 employees inside Facebook, up from about 15 last year, Systrom said.