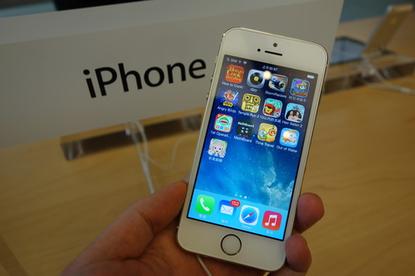 The iPhone 5S at a Beijing Apple store

With the arrival of the iPhone 5s, Apple regained its spot among the top five smartphone makers in China during the third quarter.

But the biggest gains in the period were made by market leader Samsung Electronics, which saw its smartphone shipments soar 156 percent year-over-year.

In China, Apple's market share reached 8 percent as a result of a 32 percent year-over-year increase in shipments, according to research firm Canalys. Towards the end of the period in September, the company launched both its iPhone 5s and iPhone 5c models in the country.

The shipment growth gave Apple the fifth position in China's smartphone market. In a first, the country was among the markets to receive Apple's latest iPhone models the earliest. Previously, Chinese consumers had to wait months before the device officially arrived.

"I think the iPhone 5s was the main driver of the growth," said Nicole Peng, an analyst with research firm Canalys. Demand for the phone has been so high that the gold-colored "champagne" model initially sold for 10,000 yuan (US$1,630) among unofficial sellers in China's grey market, she added.

In another sign that demand has been strong, consumers buying the iPhone 5s from Apple's China website must wait two to three weeks before the device ships out.

"The supply still cannot catch up with the demand," Peng added. But whether or not the slightly cheaper iPhone 5c will catch on the market is still unclear. "I think in Q4 we will have a clearer picture," she said. "But I expect the iPhone 5s to do very well."

Unlike the iPhone 5s, the 5c model is readily available for order on Apple's China website, which ships the device within a day's time.

Peng, however, said the bigger story in the third quarter was that of Samsung, China's largest smartphone vendor. The South Korean vendor widened its lead in the quarter to get a 21 percent market share. Trailing at second place was Lenovo, with a 13 percent share.

While Samsung may be best known for its Galaxy brand of premium smartphones, in China the company is seeing more demand for its low to mid-range handsets, Peng said.

In terms of features, many of these lower-end Samsung phones are comparable to other rival devices from local Chinese vendors. But consumers are attracted to the Samsung brand and its reputation for high quality, Peng said. In addition, Samsung has extensive retail channels in the country, and its phones are easy for buyers to find.

"Samsung has been able to stop the local players from growing as fast," she added. "Even with the domestic vendors selling more phones, these companies have found it hard to challenge Samsung's position."

Behind second place Lenovo, was Yulong Computer Telecommunication with 11 percent market share. Yulong is a local handset vendor that sells phone under the "Coolpad" brand. Huawei Technologies was fourth with a 9 percent share.