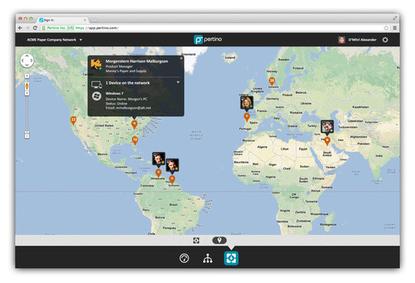 Startup Pertino plans to flesh out its cloud-based network service with additional services such as security and deep-packet inspection, which it will sell through an online app store.

The company lets small and medium-sized businesses set up virtual networks using resources hosted on Amazon Web Services and other cloud platforms. That Cloud Network Engine offering, which gives companies basic LAN connectivity with encryption, has been in beta since February and is now generally available. Pertino's next mission is to add services on top of Cloud Services Engine, enriching customers' networks with features that could eventually include voice over IP (Internet Protocol) and videoconferencing.

Pertino is using the global reach and easy provisioning of cloud resources to offer in virtual form a type of infrastructure that's usually associated with expensive routers, switches and hardware appliances. Its aim is to network small and medium-sized businesses (SMBs) that may not have the cash or staff required for conventional physical LANs.

"It's literally like you picked up a LAN switch in your office and you dropped it in the cloud," said Todd Krautkremer, Pertino's vice president of marketing. After the network is set up online, users can join it by downloading client software.

The service is priced starting at 10 devices for US$29 per month or $290 per year, with discounts as customers add more devices. Network rights assigned to users can follow them around from device to device and around the world, with the network tapping into cloud resources nearby, Krautkremer said.

Next up are network services, which Pertino will offer through its AppScape online store. There, customers eventually will find a range of cloud-based services, free and paid, from both Pertino and other companies. For example, the store might include software for URL filtering or dual-factor authentication, as well as collaboration software for end users of the network, Krautkremer said.

AppScape is starting out with just one network service, GeoView, a free real-time network mapping tool that Pertino developed. GeoView can show a network administrator where an employee's device is located, which can be useful for security. But more services are on the way, and the company expects to start offering apps co-developed with partners next year. Later, Pertino plans to offer APIs (application programming interfaces) so other software vendors can have apps of their own for sale on AppScape, Krautkremer said.

The Pertino model may be a good fit for many SMBs, Enterprise Strategy Group analyst Bob LaLiberte said. The success of AppScape, in terms of how many network services become available, will depend largely on how many enterprises adopt Pertino's service, he said. Like a mobile device maker, Pertino will need a user base to attract developers, LaLiberte said.

There are about 1,500 Pertino networks that are used every day, according to Krautkremer.

Also on Tuesday, the company announced Pertino for Android, which joins software clients for other key operating systems. Those include Windows 7 and 8, Macintosh Lion and Mountain Lion, and Linux. The Android software is now in private beta and is set for general availability in next year's first quarter. A client for Apple iOS will follow, one quarter behind, Krautkremer said.