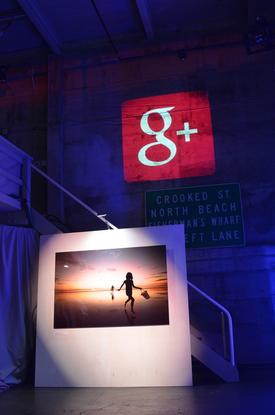 The Google+ logo projected on a warehouse wall during a company event on Oct. 29, 2013.

Mastering photography is hard, and Google wants to make it easier with new features for its Google+ social network like more image auto-enhancement features and on-the-fly splicing of multiple exposures.

Google announced the new features with artistic flair by holding a press conference inside a downtown San Francisco warehouse that was temporarily converted into a photo gallery.

The tools are designed to make it easier for people to tell their stories through photos, said Google Senior VP of Engineering Vic Gundotra.

That is, of course, as long as those people elect to tell those stories on Google+.

For photography, "we want Google+ to make it easier and automatic, if at all possible," Gundotra said during the event. The new features can be used at various stages of the photography process, whether it's to give photos more visual pop, to organize them better inside Google+ or have Google automatically edit video clips and apply music.

Google+ battles tough competitors like Facebook and Twitter but it's growing strongly. It had about 190 million monthly active users in May and now there are 300 million, according to Google.

In an attempt to spice up Google+, more than 40 new features were announced at the company's annual I/O developers conference this past May. Some of the features announced Tuesday build on those new features.

For starters, Google+ on the desktop will now automatically upload users' images in full resolution by default. That feature, which is already available on Android-based mobile devices, will be coming to iOS soon. There are also enhanced highlighting features for photos, so Google's algorithms will automatically pick certain photos to highlight in users' Google+ accounts.

While some of these features were announced in May, now the company is doing a better job at, say, hiding blurry images, sifting out duplicates, downplaying bad exposures and looking for photos containing people in users' circles, Gundotra said.

Searching for photos has also been improved. There are more than 1,000 new keywords that trigger special image-search algorithms, even if the photos were not manually tagged that way. So words like "bridesmaid," "hug," "kiss," "snowboarding" or "beach" can be used to locate relevant photos. People can also enter queries in plain English, like someone's name along with a phrase like "at the beach with sunglasses."

Users can also search for photos in their friends' libraries, as long as they already have the rights to see those pictures, Gundotra said.

In auto enhance, new features give users more control, like choosing between "high" and "low" settings to get more of a vignette effect in photos.

A new filter has also been built into Snapseed, Google's photo editing software for the desktop, iOS and Android devices. That filter, HDR Scape, mimics the multiple exposure effect on more expensive cameras, to give users an optimally exposed image with more detail and contrast.

There is also a new tool for Google's more advanced Nik Collection editing software, to give a more vintage feel to photos, and new tools in Google+ for automatically editing users' videos.