The Nokia Lumia 1520 has a 6-inch, full HD display and also includes a 20-megapixel PureView camera. 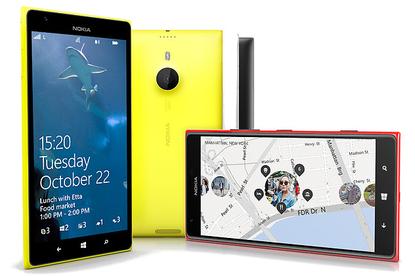 The Nokia Lumia 1520 has a 6-inch, full HD display and also includes a 20-megapixel PureView camera.

The Lumia 1520 weighs 209g and measures almost 86mm wide, so it's one of the biggest smartphones on the market.

The phone retains a similar, polycarbonate design to previous Lumia models. It features ceramic keys on the side and will be available in white, yellow, red and black colour variants.

Nokia says the black version is made from recycled materials.

The 6-inch, Full HD display on the Lumia 1520 is a significant inclusion for both Nokia and Windows Phone, as it brings the device into line with major competitors.

The extra pixels now means there's room for a third column of Live tiles on the home screen, and six tiles across the screen instead of four.

The Lumia 1520 is powered by a 2.2GHz, quad-core Qualcomm Snapdragon 800 processor. It's the same chip used in devices like the Samsung Galaxy Note 3, the LG G2 and the upcoming Google Nexus 5.

The Lumia 1520 has expandable memory through the addition of a microSD card slot. The phone will come with 32GB of internal memory.

The Nokia Lumia 1520 has a 20-megapixel PureView camera with optical image stabilisation.

The technology is a lower-resolution version of the Lumia 1020's 41-megapixel PureView sensor, but still allows users to zoom into a photo after it is captured without losing image quality.

Zoom is 2x rather than the Lumia 1020's 3x, however. The front-facing camera has a 1.2-megapixel sensor but can record 720p wide angle video.

The Lumia 1520 is the first phone to ship with Nokia Camera, which combines Nokia's previous Smart Cam and Pro Cam apps.

Nokia is also debuting a Storyteller app, which automatically integrates geotagged pictures and creates a chronological timeline on a map.

The Lumia 1520 includes a large, non-removable 3400mAh battery and has integrated wireless charging based on the Qi standard.

The Nokia Lumia 1520 will be available is expected to start shipping in Q4 2013, but Australian pricing and release details have yet to be announced.