The suite has also gained integration with Gmail, and its iOS app got an overhaul 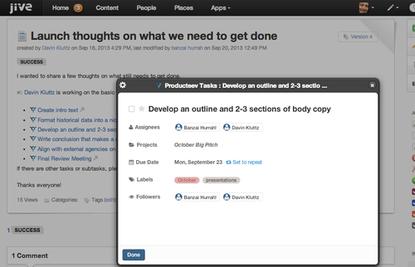 Jive revamped the employee directory of its enterprise social-networking suite to make it easier for users to find colleagues whose expertise they can tap.

The suite's Social Directory component, designed to hold detailed profiles, now lets people endorse each other, a new feature Jive feels will make even more evident the skills and expertise of employees.

In addition, when people create new groups or projects, the Jive tool will automatically suggest colleagues to invite, based on their expertise, the company said on Wednesday.

"I can build up my expertise profile but now people can endorse and recommend me even for new expertise I don't have on my profile," he said.

Jive has also expanded profiles' depth by adding data on how each employee fits within the company structure, what people's most significant contributions have been and information on their recent activity.

The suite now offers more granular usage metrics, so that administrators can get a more detailed view of how different pages, documents, blog posts and other content were received by employees, based on indicators such as "likes" and comments. This sentiment analysis can be isolated via various filters, including by department and by influential employees.

To promote interaction among employees, the suite now displays a list of people who are on a page at the same time, and gives them tools to communicate in real time right in that interface.

With this latest update, Jive finished integrating the social task management features of Producteev, which it previously acquired, so that it now offers what the company considers a full menu of capabilities for tracking what needs to get done in various projects. Jive will continue to develop and market the Producteev product as a standalone, separate tool.

In this release, Jive has also added bi-directional, native integration with Google Drive. People can take actions on files stored in the Google cloud storage service from within Jive, and work on Jive from within Google Drive. It had previously gained this storage integration with Box and SharePoint. New APIs (application programming interfaces) allow companies to build similar, custom integrations with other third-party document repositories.

In addition, Jive also linked the suite with Facebook and Twitter, so that streams from those social media sites can be surfaced within Jive communities and acted upon. Jive's suite also got integrated with Gmail, so that for instance users can turn an email thread into a Jive discussion.

The new app for iPhones and iPads has been optimized for iOS 7, and adds the ability to create documents using a rich-text editor and take and upload videos to Jive pages.

Alan Lepofsky, an analyst with Constellation Research, is attending the company's JiveWorld conference in Las Vegas this week and said he's been struck by how company executives this time around are "less evangelical" about social collaboration transforming the way people work.

"[They] are instead much more pragmatic about how social can help organizations improve the business processes they use to run their companies," he said via email.

For Lepofsky, the three most significant announcements are the integration with Gmail and Google Drive, the fusion of the Producteev task management functionality and the deeper usage metrics.

Jive also announced that early next year it will release JiveX, a cloud version of its on-premises product for building external, customer-facing online communities and support sites. It will include gamification features, search, integration with Facebook and Twitter, and links to CRM (customer relationship management) and marketing systems, including Marketo.