Chinese smartphone maker Xiaomi is not breaking up with Android

Xiaomi has no immediate plans to enter the US either 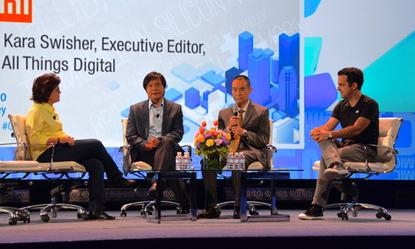 Xiaomi's Hugo Barra and Lei Jun sit down with AllThingsD's Kara Swisher at the GMIC conference in San Francisco on Oct. 22, 2013.

Rumors that Chinese smartphone maker Xiaomi might be breaking from Android to develop its own mobile operating system are not true, company executives said on Tuesday.

"No plans," Xiaomi CEO Lei Jun said of the idea to build their own system beyond Android.

Beijing-based Xiaomi makes smartphones running a heavily modified version of Google's Android mobile operating system. Recent reports have claimed that the company is working on its own Linux-based system, but on Tuesday company executives said that is not the case, during the GMIC mobile Internet conference in San Francisco.

"We have a very good collaboration with Google," Jun said during an on-stage chat with AllThingsD's Kara Swisher.

"I don't think we will branch out to a new operating system," added Hugo Barra, vice president of Xiaomi Global, who heads the company's international expansion efforts. Barra is a recent high-profile hire for the company, having previously been a top Android executive at Google.

Xiaomi would rather innovate on top of Android's open-source model than build the foundation itself, Barra said.

"There's no real reason or rationale to deviate from that," he said.

Xiaomi has seen its notoriety rise since Barra joined, given his previous standing at Google. Xiaomi is a major rival of Apple's in China, but is looking to expand internationally to tackle new markets.

But while the U.S. would be an important market for Xiaomi, the company does not appear to have any immediate plans there. "We want to enter [the U.S.], but only when we are ready," Xiaomi's Jun said.

One of the company's biggest challenges in growing internationally, Jun said, is finding the right talent and integrating its teams between different countries. Barra, he said, will help the company in that effort.

"We haven't decided which markets to enter yet," Barra said. Barra made some other candid remarks at the show, praising Xiaomi's fans and user-focused product development.