Apple announces October 22 event, says it 'has a lot to cover' 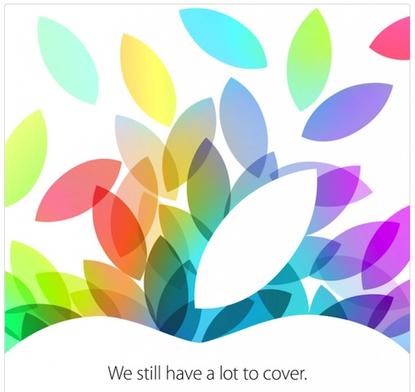 What's better than one Apple event? Two Apple events, naturally. The folks from Cupertino evidently agree, as they have dispatched invitations to the media for a gathering next Tuesday, October 22, in San Francisco at the Yerba Buena Center for the Arts Theater. The show kicks off at 10 a.m. Pacific, 1pm Eastern. (That's Wednesday, October 23, at 7am, Sydney time)

In teasing the event, Apple says "We still have a lot to cover"; the image shows a kaleidoscope of the iconic leaf from the Apple logo in a variety of different colours - a very autumn-like image. No doubt much speculation is already focusing on the significance of said leaves.

Apple's plans to hold this event were first reported by AllThingsD's John Paczkowski last week, and later confirmed by The Loop's Jim Dalrymple.

It's widely expected that Apple will take the opportunity to roll out new iPads, including a fifth-generation version of the 9.7-inch model and a new iPad mini that may feature a Retina display. Likewise, the company will probably take at least a little bit of time to discuss the forthcoming OS X Mavericks and redesigned Mac Pro, both of which are scheduled for a release.

And when it comes to Apple, you can never completely rule out something unexpected up the company's sleeve. (Veiled smartwatch reference? Check!)