Heat it, bend it, slam it and the latest gadget glass won't break

Nippon Electric Glass subjected glass to various forms of torture at Ceatec, with few problems for the glass 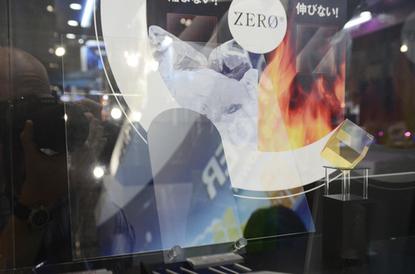 Pity the glass on the front of your smartphone. It typically gets subjected to a lot of abuse through its life and sometimes even shatters if the forces are too much. But glass manufacturers are continually pushing the boundaries of what's possible with the material, and some of the latest gadget glass is on show this week by Nippon Electric Glass at the Ceatec 2013 expo.

Among the more impressive demonstrations, the company was showing off the impact resistance of its "T2X" chemically strengthened glass that's already used in smartphones and tablet PCs.

Every 30 seconds throughout the show, a 500-gram steel ball was dropping from a height of about a meter onto a sheet of the glass about the size of a small TV screen. Every time the ball fell, it bounced off the front of the glass and the sheet appeared none the worse for the demonstration.

Equally impressive was the company's G-Leaf glass, which is so thin and flexible that it is supplied on a roll to customers.

It looks exactly like a roll of plastic film, but the 35-micron thick sheet is actually glass. It's been used in flexible display panels and can be gently curved around corners, but isn't strong or flexible enough to be folded.

A new version of G-Leaf, on show for the first time at Ceatec, had an Indium Tin Oxide (ITO) coating. That's a common base coating for touch panels and displays, so the new glass at just 100 micron or 0.1 millimeters thick could form the base of a flexible touch panel display.

The company's "Zero" glass can withstand high temperatures without expanding or contracting. That's not so useful in a consumer gadget but important in the manufacturing process for many of the chips that go inside phones.

The glass is already being sold to semiconductor manufacturing equipment makers, which need to maintain a precise alignment in their machinery. A demonstration at Ceatec involved heating a sheet of the glass to 400 degrees Celsius and then spraying it with cold water so the temperature fell rapidly. The glass didn't break or crack.

In another corner of its booth, Nippon Electric Glass was showing something that at first seemed like a joke.

"Invisible glass" said a size with arrows pointing into thin air. Visitors were asked if they could see the glass and many couldn't, but this wasn't a joke.

There really was a glass sheet there but it didn't become apparent until viewed from the side.

The glass reflects just 0.08 percent of the light that travels through it. That's substantially less than the 4 percent on a normal sheet of glass and so appears all-but invisible from the front.

Nippon Electric Glass said it's targeted at museums and similar applications where things need to be displayed but kept protected.