The technology promises safer driving, but didn't work in a demonstration 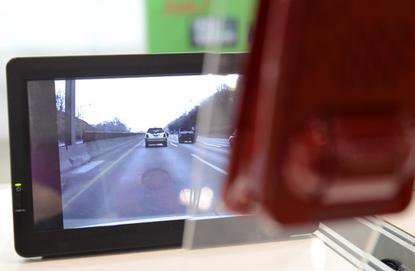 A drive camera from South Korea's GT points at a video of a road during a demonstration at Ceatec 2013 in Japan on October 2, 2013

A South Korean company has developed a smartphone and camera combo that it claims brings to any car some driving safety features typically found in only high-end automobiles.

The product connects an Android smartphone with a drive recorder camera through a dedicated Wi-Fi link. Once the two devices are connected, the smartphone pulls in the video image from the camera and constantly monitors it for a couple of potential problems on the road ahead.

It will alert the driver if it considers the car is too close to the one in front and a collision is possible and if the driver begins straying out of the lane. Both features are beginning to be installed on high-end cars from several auto makers, but remain unavailable on older or cheaper models.

The camera also functions as a drive recorder, storing 720p high-definition video on a memory card or in the smartphone through the app.

Both the camera and app were on show at this week's Ceatec show in Japan, although the Wi-Fi link between the two wasn't working. It was likely a result of the many Wi-Fi signals in Ceatec's crowded events hall.

The camera and smartphone combo should be available later this year for around US$100, the company said.