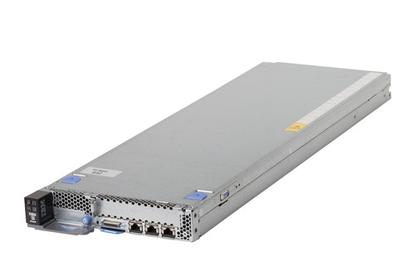 IBM is working to develop microservers based on low-power processors but isn't sure yet when the systems will be introduced.

The company has already built a prototype board that could function as microserver but has yet to determine what workloads it would be used for, said Gaurav Chaudhry, IBM worldwide marketing manager for System x high-performance computing.

Dozens of microservers packed into a chassis could reduce energy use, space requirements and cost compared to a smaller number of traditional 1U or 2U servers, he said, but IBM is still researching the systems and figuring out who would be the target audience.

After a few delays, Hewlett-Packard launched its first Moonshot server earlier this year and recently updated it with Intel's newer Avoton chips. The server is aimed at Web-scale workloads and HP claims Moonshot is 90 percent more energy-efficient than a more traditional Proliant DL380 server.

IBM, not surprisingly, says it's determined to do better. "We want to go out and beat the competition," Chaudhry said.

While it works toward microservers, the company is also introducing other types of high-density server design.

On Tuesday it introduced the NextScale System, a rack server system that can accommodate up to 84 x86-based systems and 2,016 processor cores.

The 6U enclosures can share cooling resources and power supplies, reducing power costs.

"You cut down on the number of power supplies ... and double the density," Chaudhry said.

"The whole idea is there are different people who have different requirements. Cloud guys don't care about a ton of compute, they care about density," Chaudhry said.

Each server board has its own storage and network components and connects directly to the top of the rack for networking. Other components, such as graphics processors, can be attached to a PCI-Express 3.0 slot, and a mezzanine card can bring different types of networking such as InfiniBand into the servers.

"We thought a lot about it. Turns out 6U is the optimal space for many things that we can do to satisfy the industry requirements," Chaudhry said

The NextScale chassis is flexible and could be extended to microservers in the future, Chaudhry said, adding that IBM didn't want to have to go back and design a different chassis when its microservers come out.

The Ivy Bridge-based NextScale System will start at US$4,049 and vary in price based on configuration, IBM said.