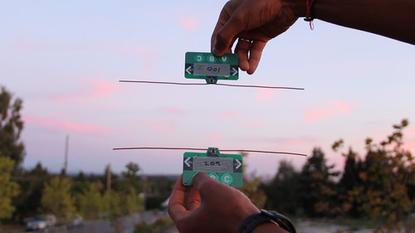 Researchers demonstrate how one payment card can transfer funds to another card by leveraging the existing wireless signals around them. Ambient RF signals are both the power source and the communication medium.

Engineers at the University of Washington have developed a way to communicate over short distances using devices that don't require batteries or transmit any signals.

They've developed a pair of devices that can successfully exchange data at speeds of up to 10kbps over a distance of up to 1 meter -- something that could be useful in applications as varied as wearable devices or building sensors.

The secret to the unusual communications method is the TV broadcasting signals that fill the airwaves of cities and towns across most of the world.

The signals are some of the strongest on the air but reception can be degraded as reflections from buildings, trees and even aircraft affect the signal level received by an antenna. The researchers have taken advantage of the difference reflection can make as the basis for their system.

They've developed a couple small devices that can communicate by reflecting or absorbing TV signals.

Both devices are tuned to work over channels 22 to 29 of the UHF TV broadcasting band and the TV signals are used in two ways, said Joshua Smith, an associate professor at the University of Washington and co-author of a paper on the system.

First, a few 10s or 100s of microwatts can be induced from the over-the-air signals to charge up a small capacitor that acts as a battery for the simple circuitry.

Second, data transmission works by having one of the devices reflect or absorb the received TV signal while the other watches for changes in the received signal level of the TV broadcast. When the first device is reflecting, the level of signal received at the second device should be higher and when it's absorbing the signal level should fall. By detecting the difference between the two, the system has the basics for binary data transmission.

Data can be sent as fast as 10kbps when the two devices are about 30 centimeters apart. This falls to around 100bps at one meter, but the researchers believe it should be possible to increase the speed and distance with additional error detection.

And because the devices are looking for fast, momentary changes in signal level occurring hundreds of times per second, they are not affected by signal level changes at slower speeds, such as that might happen when a car drives nearby.

(A video demonstration of the technology can be found on YouTube.)

Researchers see the system as potentially useful for short-range communication between wearable electronics devices or for sensor networks in construction or agriculture. They have also hypothesized use of the technology in near-field communications applications.

Details of the research were published at the Association for Computing Machinery's Special Interest Group on Data Communication 2013 conference in Hong Kong this week. It won the conference's best-paper award.