Newly signed-on developers include Viddy, Over and WordPress 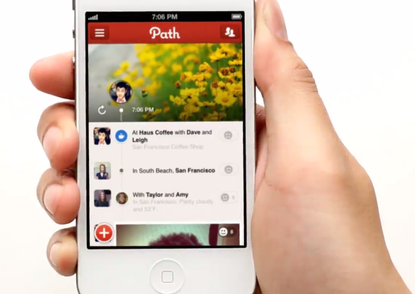 Path, the social network designed to better connect people who are already well-acquainted, is opening up its API to 13 outside developers to give its users more ways to share content.

The new partners were announced Monday as part of an expansion of the company's API (application programming interface). The changes, which were laid out in a blog post, are aimed at making it easier for Path's users to publish a wider range of content such as personal exercising data, photos and videos, and blog posts.

The list of developers includes Strava Cycling, which provides a running and cycling GPS tracker and performance analytics; Viddy, for mobile video; Over, which adds text to photos; and the blogging site WordPress. Path seemed to have its more pious users in mind too -- Holy Bible, which describes itself as the site dedicated to God's word, was also included.

The integrations constitute a considerable expansion of the Path API, increasing the number of enlisted partners from two to 15.

The companies were hand-selected by Path based on what the social network saw its users were already sharing through screenshots, said Matt Van Horn, Path's vice president of business development, in an email. "With the API we're making it easier for people to share these things in a way that fits in our interface design and within our quality guidelines," he said.

Path first announced its API program last year by partnering with Nike to let users share their daily workouts. Path already lets its users post content in the form of photos, videos, thoughts and music, but with Monday's expansion, "users can personalize their Path even more," the company said.

Path positions itself as a more "intimate" social network compared to Facebook or Twitter, partly because users are limited to having only 150 friends on the service. The company's goal is for users to develop a high-quality network to connect more deeply and share personal moments with their closest friends and family, according to its website.

The company has seen some strong growth since it launched in 2010. In April Path announced via tweet that it had 10 million registered users, up from a reported 2 million in the previous year.

Path is still small though compared to Facebook, which has more than 1 billion users, and Twitter, which has roughly 200 million.

Path seems intent on enlisting more outside partners in the future. "Moving forward, we will continue to work with developers with whom we share values," the company said Monday.

Users will be able to start sharing to Path from some of the new partner sites starting Monday, with the rest of the integrations becoming active in the coming weeks, Path said.