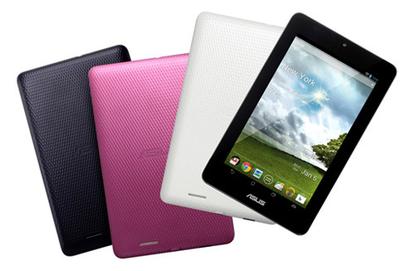 Taiwanese PC maker Asus plans to launch new tablets in its Transformer and MeMO Pad lines of Android tablets later this year as it aims to build up its brand in the tablet space alongside the Google Nexus 7 series.

In the near future, Asus wants its own tablet products to become bigger than the Nexus 7, a product the company partnered with Google to develop. The latest model was unveiled last month and pricing starts at US$229.

"The goal is our own branded tablet volume will be bigger than the Nexus 7 volume," Shen said. "After a six month effort, I believe in Q3 our own branded products will achieve more than 50 percent of our total tablets."

He expects this trend to continue in this year's fourth quarter and into next year's first quarter.

Asus is preparing more tablet products as demand for PCs continues to decline much faster than industry experts had projected in this year's first half, Shen said. In the second quarter, Asus posted a 1 percent year-over-year decline in net profit, with Shen attributing it to weak demand for PCs and "product transition issues."

"The product cycle is shorter and shorter for all consumer electronic devices, therefore the product transition management has become tougher and critical," he added.

In addition, Asus's CEO said the company plans to launch a PadFone product in the U.S. next year with a local telecom operator. The PadFone works as an Android smartphone that can turn into a tablet when snapped inside a 10-inch slate.