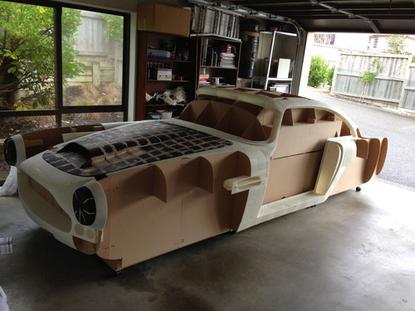 Since last December, Ivan has been hard at work, putting together a plastic replica of an Aston Martin DB4—the precursor model to James Bond's famous DB5—made of enough 3D-printed parts that Ivan calls it a “2500-bit jigsaw puzzle.”

We've seen some pretty big things come out of 3D printing projects. An oversized iPhone case! A 3D-printed hexacopter! Even a room-sized urn! But a full-sized 3D-printed replica of a car just seems ludicrous.

Ivan Sentch, a classic car enthusiast from New Zealand, is building just that. Since last December, Ivan has been hard at work, putting together a plastic replica of an Aston Martin DB4--the precursor model to James Bond's famous DB5--made of enough 3D-printed parts that Ivan calls it a "2500-bit jigsaw puzzle."

To create his replica, Ivan started with a wood frame that he glued 150 by 150-millimeter 3D-printed tiles on top of. On the design end, Ivan based his virtual DB4 model off of a 3D drawing from TurboSquid, a site that provides stock 3D textures and models, and cut it up into cross sections using Autodesk's 3DS Max modeling software. Ivan plans to transplant the mechanical bits from a Nissan Skyline GTS25T donor car to make himself a fully running automobile.

Before starting the project, Ivan, a programmer by day, was a self-proclaimed 3D printing newbie. Over the last seven or so months, he taught himself how to 3D-print--which included learning everything from manipulating 3D models in AutoCAD to actually creating his first 3D-printed parts.

Ivan says that he's printed nearly 72 percent of the car so far, including the hood, trunk, and doors. From the looks of it, he only has some side paneling and the dashboard left to make. He hopes to fabricate the remaining parts of his car in the next two months using the Solidoodle 2 3D printer that he's had running night and day since last Christmas.

But don't expect to see Ivan driving around in a 3D-printed car--as cool as that would be. Ivan tells TechHive that his 3D-printed model (known as a "plug") is really just the framework for future fiberglass bodywork, which will go on top of it.

"This sort of [replica bodywork] project is not uncommon, but people usually get the plug CNC-cut out of foam," Ivan explained in an email interview. "I was told to expect $12K to $15K NZD [$9,574 to $11,967 US] for a CNC cut plug, which nearly killed the project idea, but somehow I had the thought to look into 3D printing as an alternative."

By comparison, Ivan estimates that the materials required to print a complete replica of the car would come to a grand total of 2250 New Zealand Dollars--or about $1,795 US.

By the time Ivan finishes his 3D-printed replica, says he will have printed a total surface area of 18.5 square meters (60 square feet) using about 64 spools of plastic filament. Even after Ivan has completed his plug, he still has plenty of work ahead of him before he can start laying the first sheet of fiberglass. His next steps include filling in every seam between the 3D printed panels and buffing the whole thing to a glassy finish. We can't wait to see the final product, and you can keep track of Ivan's project on his blog.