The system includes servers, storage and networking but is designed to run in a regular office setting 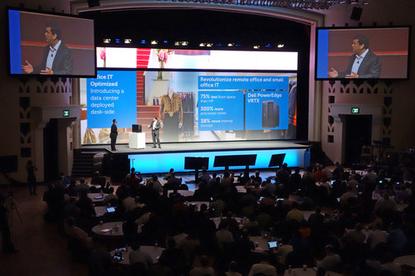 Dell has introduced a converged computing, storage and networking system for small and remote offices, the PowerEdge VRTX, saying it will let customers deploy a system with virtualization in hours.

Converged systems are playing a growing role in large enterprise data centers because of their ease of deployment. The VRTX, announced on Tuesday at the Dell Enterprise Forum in San Jose, California, is designed to fit into smaller sites with limited space, power and IT staff. It can be powered from a conventional wall socket instead of on DC power, doesn't need special cooling, and is "library quiet," said Forrest Norrod, vice president and general manager of Dell Server Solutions.

The VRTX can accommodate up to four servers running as many as 100 virtual machines, plus as much as 50TB of shared storage, Norrod said. All of its components can be managed under single unified management system. Because the system can be configured in many different ways, prices will vary, Norrod said.

The system is in trials with 200 customers and is set to go on sale this month. A lower end system should cost less than US$10,000, while others may cost two or three times as much, Norrod said.

Those specifications might be ideal for a remote private cloud for a small or medium-size enterprise, said Chaya Vavilala, a cloud systems administrator at Webair Internet Development. His company, a Web hosting, collocation and managed services company in the New York area, hosts remote systems for clients at a data center on Long Island. The outages caused by Hurricane Sandy last year have increased interest in remote systems for disaster recovery, Vavilala said.

As a converged system, the VRTX platform would be much easier to deploy than separate server, storage and networking components that need to be integrated, Vavilala said. Heading into the conference after Tuesday's keynote, he said he wanted to find out more about how the system can scale out as organizations grow.

Storage for a VRTX can be expanded by adding external capacity, but for the most part the platform is designed to stand alone, not to be clustered into a data center, Dell's Norrod said at a news conference later Tuesday.

"It is not a solution for every environment," Norrod said. "Every optimization is always a set of tradeoffs." Customers will have other such systems to choose from at different sizes, he added. "This is far from the last converged system you're going to see us bring to market."

Customers will be able to set up virtualized systems with the VRTX using either Hyper-V or VMware hypervisors. Its hardware is built on the foundation of the PowerEdge line, and it will take the same server blades as the PowerEdge M1000e blade enclosure, Norrod said.