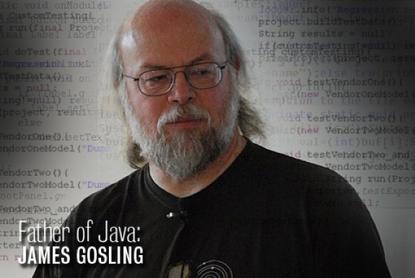 Java founder James Gosling has taken a job with Google, he revealed in a blog post on Monday.

"Through some odd twists in the road over the past year, and a tardis encountered along the way, I find myself starting employment at Google today," Gosling wrote. "One of the toughest things about life is making choices. I had a hard time saying 'no' to a bunch of other excellent possibilities."

"I don't know what I'll be working on," he added. "I expect it'll be a bit of everything, seasoned with a large dose of grumpy curmudgeon."

Gosling left Oracle last year after it purchased Sun Microsystems, the company where he created Java, the now-ubiquitous programming language. While initially somewhat vague about the reasons for his departure, Gosling later told eWeek that the reasons included inadequate compensation and an atmosphere of micromanagement.

His arrival at Google comes as the company is being sued by Oracle over alleged Java patent and copyright infringements in its Android OS. That matter and others have raised tensions in the Java community of late.

"Developers are unsure what future controls Oracle will try to foist over the Java community," said Redmonk analyst Michael Coté. "It's hard for many Java developers to feel sympathy for anything less than a very, very open Java after it was open-sourced many years ago."

It makes sense for Google to bring aboard a figure with Gosling's prominence and background, according to Coté.

"Google has hired some of the larger thought and technical leaders in the Java world," he said. "Having them on board and, important to this point, working on Java, certainly would give Google a bigger voice in the Java community."

In addition, Gosling is "clearly a good coder and a legend in the field, as it were," he said. "He's exactly the kind of person Google likes to collect up and use its cushy position to fund and, hopefully, let flower into new innovations."