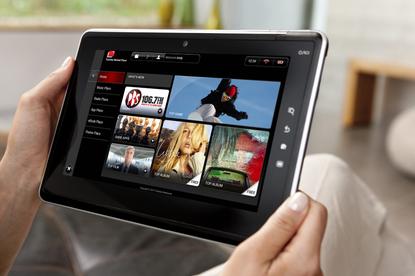 Toshiba's tablet, the Folio 100, comes with Android version 2.2 and a 10.1-inch capacitive screen.

The Folio 100, Toshiba's entry into the tablet race at the Internationale Funkaustellung (IFA) trade show in Berlin, comes with Android version 2.2 like the competition, but the company has opted for a larger 10.1-inch capacitive touchscreen.

The larger screen size comes at a cost -- the Folio 100 weighs 760 grams, compared to the Samsung Galaxy Tab, which has a 7-inch screen and weighs 380 grams. It will be up to consumers to choose between screen size and portability.

The Folio 100 measures 28 centimeters by 18 cm by 1.4 cm. There is an Nvidia Tegra 2-processor under the hood and 16GB of built-in storage, which can be expanded using an SD card.

The battery should last for up to seven hours, as long as the tablet is used primarily for Web browsing most of the time.

The list of preinstalled software includes the Opera Web browser and Fring, an application that in combination with the embedded 1.3-megapixel webcam allows users to make video calls, according to Toshiba.

The use of Android version 2.2 adds support for Flash 10.1. At first, the Folio 100 will access the Internet using Wi-Fi, including 802.11n. But it will also be equipped with 3G soon, according to Toshiba.

The tablet has also been equipped with Toshiba's own marketplace, which will include music, applications and radio channels.

The Folio 100 will be available during the fourth quarter of 2010 throughout Europe, the Middle East and Africa, and the Wi-Fi version will cost about €399 (US$510).